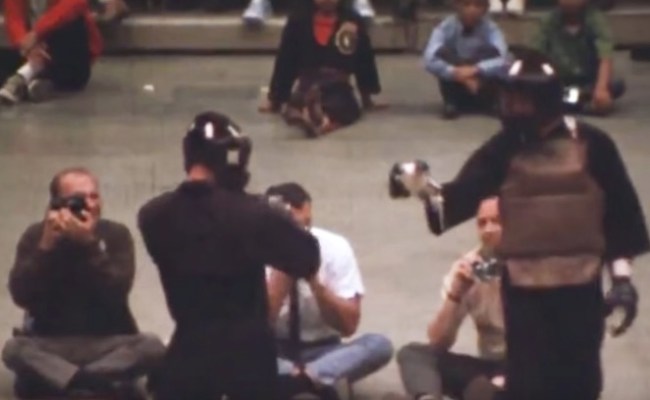 Bruce Lee was arguably the greatest martial artist to ever live. Before he tragically died at the age of 32 back in 1972, Bruce Lee had pioneered his own field of Kung-Fu.

He’d also done more for the sport than any other man alive by bringing it to mainstream Hollywood (and Hong Kong) in a way that had never been done before. He was a worldwide celebrity, and he was also an incredibly skilled mixed martial artist who was well versed in multiple disciplines.

Bruce is best known for the Kung-Fu he displayed in his movies. The one-handed pushups and his 1-inch punches wowed audiences. Before Bruce Lee was an international celebrity he was competing in martial arts competitions. Remarkably, only one of Bruce Lee’s true MMA fights (not on-screen movie fights) was ever recorded and that footage was recently unearthed.

In this bout, Bruce Lee was fighting one of his own pupils, Ted Wong. Ted is said to have been one of Bruce Lee’s greatest pupils. The two are wearing protective gear in the fight because that was the law of the land back then, and they wouldn’t have been allowed to fight in competition without it.

It truly is a shame that there’s only one known recording of Bruce Lee’s actual fights. If Bruce Lee were alive today we’d have thousands of hours of footage and his entire life would be on display. I’m not sure what’s better…Getting to see the only known recording of Bruce Lee fighting after the video’s been restored to 4K or seeing otherwise incredible athletes make asses out of themselves on social media every day in between moments of greatness?