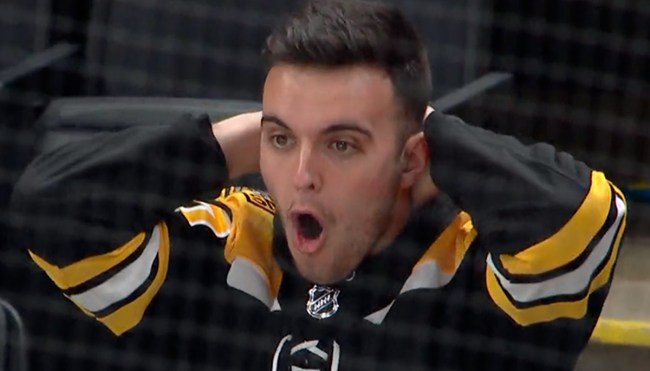 Tuesday night’s showdown between the Bruins and the Maple Leafs had the potential to be a fantastic tilt; the two rivals headed into the contest tied for third place in the wildly competitive Atlantic Division, and I, 4-1, predicted it’d be a pretty tight game.

However, that didn’t turn out to be the case. An uncharacteristically porous Jeremy Swayman surrendered six goals over the course of the first two periods and was ultimately replaced by Linus Ullmark when Boston took to the ice down by four goals at the start of the third.

The Bruins did show some fight in that final frame, as they managed to cut the deficit to three with around seven minutes to go before Taylor Hall appeared to make things somewhat interesting by putting the puck in the net to make the score 6-4 with 2:22 remaining in regulation.

Play is being reviewed pic.twitter.com/XlDdlw52YR

However, the goal was quickly called off due to goalie interference much to the displeasure of the Bruins fans who’d decided to stick around.

Bruins fans are confirmed not happy with Taylor Hall’s goal being called off for goalie interference pic.twitter.com/uoo2ZjqUdm

It’s safe to say no one was more displeased than one guy who was captured expressing his disbelief in a truly hilarious fashion after learning Hall’s goal had been taken off the board.

Nobody has ever disagreed with a no-goal call more than this Bruins fan. 😂

What's my guy looking at?

Officials allowed the goal to stand after it was reviewed, and while the Bruins were unable to score after pulling the goalie for the last couple of minutes of play, at least this guy can take solace in knowing he earned 15 seconds of internet fame.