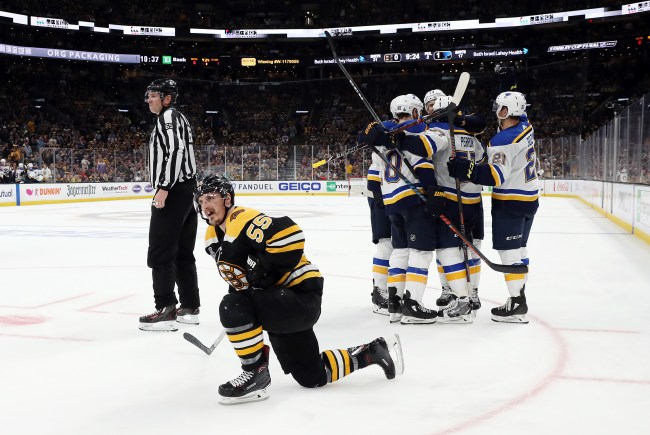 Stop me if you’ve heard this before but the refs are being blamed for single-handedly derailing the outcome of a very important game.

You don’t need to be Coach Bombay to have recognized a clear trip directly before the Blues scored to make it 2-0 midway through the third period. Blues forward Tyler Bozak tripped Bruins forward Noel Acciari from behind, sending him to the ice and out of play. Seconds later, David Perron scored what turned out to be the game-winning goal, with the Blues now one win away from hoisting their first ever Stanley Cup trophy.

The Acciari trip in question pic.twitter.com/mrOAvvCZEd

The missed call was just icing on the cake in a wholly poor performance by the refs, who also missed a couple of Blues’ high hits on Torey Krug. Bruins legend and current team president Cam Neely perfectly summed up the sentiment of Boston fans…

Bruins bettors every time the refs miss a callpic.twitter.com/gHhAiL3nsJ

After the game, B’s coach Bruce Cassidy labeled the missed call “egregious” and a huge “black eye” for the league. Meanwhile, Bruins fans used Twitter as a means of therapy.

Fuck. These. Refs. They are RUINING this sport. How can anyone take you fucking seriously when you’re so obviously a fucking disaster. #Bruins

I’m not one to complain about the refs, but this game has been clearly one sided and that non-call on the trip was as bad as it gets #Bruins

That crap no-call may yet cost the Bruins this game.

#Bruins were hosed by the refs tonight, and I’m not a blame the refs guy. No other way to spin this one.

Believe it or not, the rest of the planet has no sympathy for a city that hasn’t won a professional sports championship in all of like, 8 hours.

Nobody gives a flying fuck what you think about the officiating , you did not lose because of the refs so quit complaining.

Also Boston fans when refs screw the Bruins over: pic.twitter.com/B4NQFbDVj2

Waking up to see the Bruins lost, got screwed by the refs, and their fans were beating each other up pic.twitter.com/jAcne5alB3

bruins fans if the refs miss another obvious penalty pic.twitter.com/kEgFwaEBi1