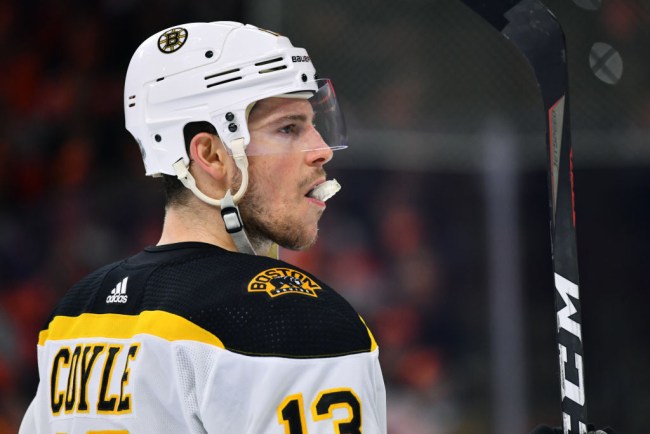 Coyle was spotted, both in a video and picture, wearing a shirt with a Boston PD logo on it, but then the police logo disappeared. The evidence was rather obvious that someone did some editing to remove the logo and now the Bruins have reportedly admitted to Turtleboy Sports that they did indeed photoshop the Boston PD logo off of Coyle’s shirt.

Team president Cam Neely explained in the email sent to Turtleboy Sports that the team was trying to “protect this player from unfair criticism.” Neely’s statement also stated that the removal of the logo “was not meant as a sign of disrespect in any way.”

Neely spinning the photoshop job as a way to ‘protect’ Coyle is, well, something. It’s mind-boggling that Neely and the Bruins decided to step in and protect a 28-year-old from ‘unfair criticism’ for simply wearing a shirt with a Boston Police Department logo on it.

It’s interesting to think whether or not we’d even be discussing this if the team didn’t photoshop the logo off of the shirt. It was such a small logo that was honestly barely noticeable, odds are people wouldn’t have even noticed it in the first place if they simply kept it on the shirt.

The Bruins recently deleted the tweet that included multiple photos of Coyle shooting a basketball in the shirt. The tweet was a collage of four photos with the first showing Coyle clearly wearing a black shirt with a logo on it, the next two photos were close-up shots of Coyle and the logo was gone. The team has yet to delete an Instagram video showing Coyle in the same Boston PD shirt.

You can see Coyle wearing the shirt while taping his stick 12 seconds into the video.