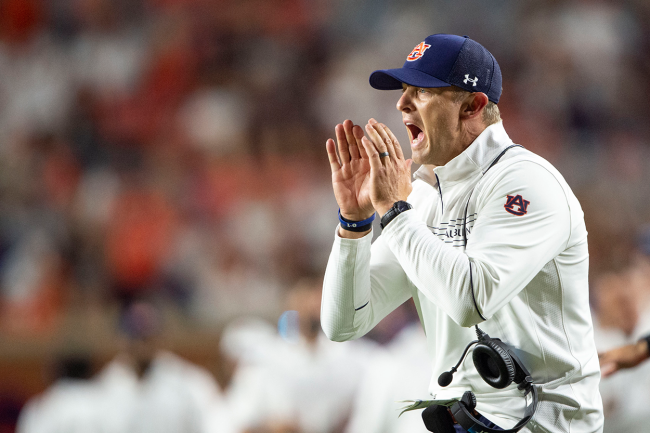 Bryan Harsin has had a chaotic first year as the head football coach of Auburn University. He was hired to lead the Tigers program despite an underlying disagreement from boosters surrounding the program and went 6-7 with a bowl loss.

It was not a strong start to his tenure on The Plains and it only got crazier during the offseason. Harsin’s job came into question as rumors (that were ultimately found to be false) floated around his personal life. From there, a group of former players spoke out about culture concerns as the program conducted an internal investigation.

In the end, Harsin was cleared of everything. The school did not find any wrongdoing and Harsin kept his job.

Now, as he enters his second year, his job could very well be on the line if the Tigers do not succeed. There are a lot of big games on the schedule and Harsin wants to make sure that his team is ready for the task.

During a recent appearance at an NIL event, Harsin made his mindset very clear. He only wants guys who are ready to compete in big games, and if they aren’t then he is fully prepared to turn to the next man up who is ready.

Auburn is ready for the bright lights 🦅 pic.twitter.com/LKxKjF7NbL

Auburn’s first big game comes with a home game against Penn State on September 17th. From there, away games at Georgia, at Ole Miss, at Ole Miss and at Mississippi State surround home matchups against Texas A&M, Arkansas and LSU. A path to 10 wins is not easy, but Harsin wants his guys to be willing to take on the task.