Bryan Harsin Is Hesitant To Trust Auburn’s Boosters After His Most Recent Comments, But Also Doesn’t Seem To Care 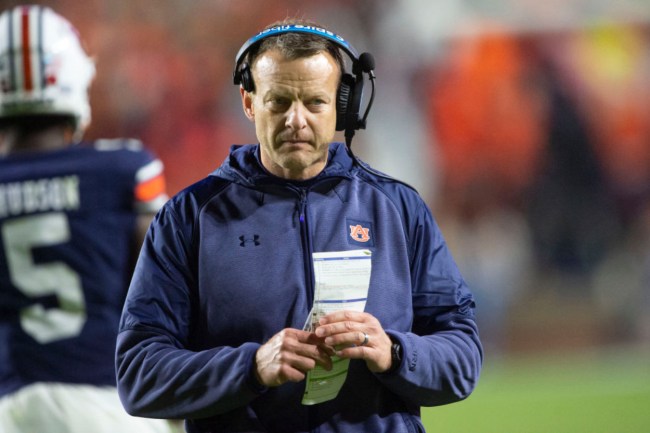 It’s been an eventful offseason for Auburn head coach Bryan Harsin, to put it mildly. His latest comments about Auburn boosters is just the latest chapter in the drama.

In early February, rumors about Harsin that have nothing at all to do with his coaching abilities began to swirl. Harsin’s wife and one of his daughters even jumped on Instagram to defend the head coach.

Harsin’s future was very much up in the air, and then the university released a statement announcing that it was looking for information anywhere it may appear in relation to Harsin. The school also stated it does “not make institutional decisions based on social media posts or media headlines.”

The Auburn head coach recently appeared on ‘Next Round Live‘ and shared his thoughts about the recent drama, specifically about certain boosters rumored to want him to be fired.

“I think that’s always something you can speculate in many programs,” Harsin said. “Like who the decision-makers are, I think more so at Auburn, from what I’ve learned. But at the same time, I’m here to coach football, I’m here to lead this team, I’m here to help build this program.

“From that standpoint, I don’t get into too much of those decisions and necessarily who’s making them. To me, everybody has a responsibility, I’ve got bosses, that’s one thing that I understand as well. I’ve got things that I need to do as a football coach here.”

At the end of the day, Harsin seems authentic and honest here, or at least that’s how his comments sounded. He’s in control of what he’s in control of, and the boosters play their own role, granted a very big one.

Some Auburn fans may actually appreciate Harsin essentially saying he doesn’t care about the boosters because he can’t control that group of people, just what happens on the field.