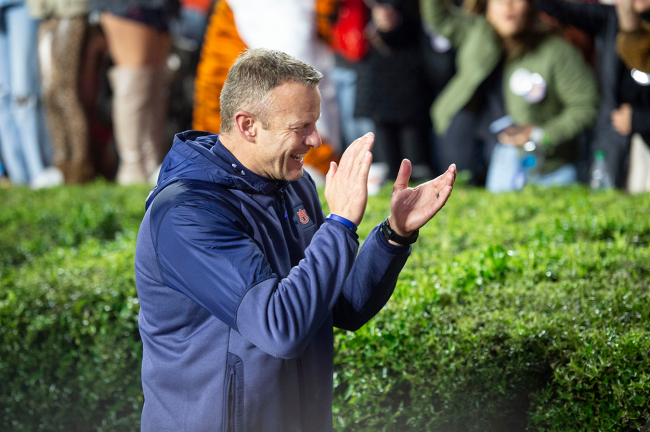 Bryan Harsin had an unprecedentedly tumultuous offseason that was full of false controversy and a lot of litigation. However, despite seemingly every attempt by the university and its donors to have him fired, he remains the head football coach at Auburn University for his second year.

With all of the chaos and difficulty in the past, Harsin has turned his focus to spring practice. As is typical of the spring sessions, a lot of the focus is on the quarterback situation, what the depth charts might look like on both sides of the ball and what young guys are making an impression.

Not a lot of focus, as is the case year round, is given to the punter. Every so often, the punter unleashes an absolute bomb to flip the field in a crucial situation or pins his opponent back with a diabolical coffin corner kick.

Outside of those moments, the punter is typically only in the spotlight for negative reasons. Thus, when Harsin was asked about his punter earlier this week, he could not have been more excited to talk about him.

Oscar Chapman, a junior from Australia, finished last season ranked second in the SEC. He averaged 41.4 yards on 57 kicks and landed 23 punts inside the 20-yard-line.

After Saturday’s spring game, Harsin was asked about Chapman and was thrilled.

“I’m glad you asked me that about the punter,” he said.

And then he proceeded to go off about how much he loves him.

“I’ve said this before: I’m a big fan of Oscar. I know we want to score every single time, but you’re gonna flip the field when you’ve got an elite punter. I think Oscar is one of the best in the country. I say that because I’ve seen him. He’s a phenomenal young man and an awesome leader. I think he executes at a high level every time in practice when it’s his opportunity to go out there. That helps us with field position. Teams that can win the field position battle, that’s a big part of it.”

Shoutout to Chapman, shoutout to the reporter who asked about Chapman, and shoutout to Harsin for loving his special teamer the way that he does.