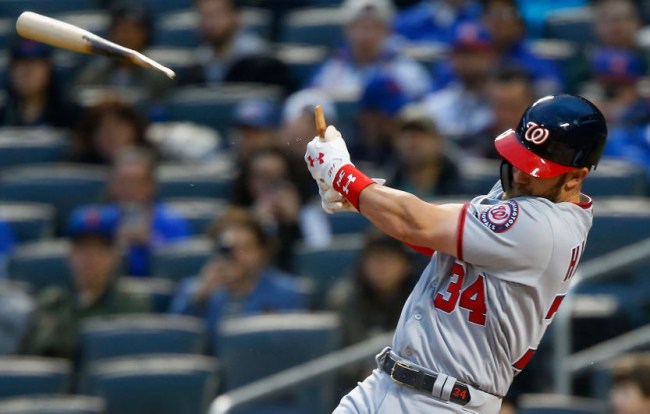 In many ways, Bryce Harper is to baseball what LeBron James is to basketball and what Tiger Woods was (is?) to golf. He was a highly touted prospect at a young age but was able to handle the pressure that comes with being in the spotlight and went on to become a beast in the MLB. If Danny Almonte is Macaulay Culkin, Harper is the girl in Matilda who grew up to write stuff for places like The New York Times.

While Tim Tebow might currently be the most popular baseball player in the world, Harper is easily one of the most dominant. The blow-drying expert has literally ripped the cover off of a ball with his power and has repeatedly shown his ability to deliver in the clutch— like when a fan called him “overrated” and he immediately responded by hitting a home run.

Last night, Harper showed off more of his superhuman powers during his first plate appearance during a matchup against the Mets. He put the Nationals on the board with his seventh home run of the season on a broken bat swing that sent the ball flying 406 feet into the stands.

Benny "The Jet" busted the guts out of a baseball…

Harper also brought a souvenir with him when he started to jog the bases.

lol at Bryce running with the remaining toothpick of a bat pic.twitter.com/xFTuSeg6B0

However, not everyone was thrilled with his achievement. According to Larry Brown Sports, a number of members of the Houston Astros pitching staff donned their tinfoil hats and used this as the latest in a long line of examples suggested baseballs are being juiced to promote offense.

Without naming names, I will report that Houston's pitchers were, uh, wondering about the baseballs upon seeing clip of Bryce Harper's broken-bat bomb.

I’m sure the traditionally quiet and understated slugger will take kindly to their accusations.