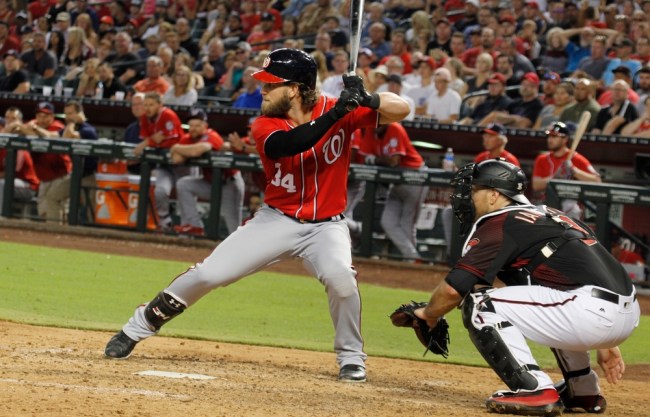 Despite what you might think as a baseball fan of any team that isn’t the Washington Nationals, Bryce Harper is not overrated. He finished last season batting .319 with an OBP of .413 and 29 home runs. He’s off to an incredibly hot start through the first weekend of the 2018 MLB season with 2 HRs through 3 games, a batting average of .400 and an OBP of .429.

Calling Bryce Harper ‘overrated’ is a definitive clown move, bro, especially when he’s at the plate. This happened yesterday in Cincinnati after Harper had already hit a home run earlier in the game. You can check out this clip (with the volume on) and hear the Reds fan call out ‘overrated’ just before Bryce sends a bomb over the outfield wall:

3. Bryce launches his SECOND HR of the game. pic.twitter.com/BTttlni4M2

As any good Bryce Harper fan knows, the antonym of "overrated" is "underestimated." #Nationals https://t.co/hA13BDKcki

Pretty awesome. Plus, anyone who randomly yells some dumb, inane thing at a sporting event (watch a golf tournament sometime) needs to acquire a life. https://t.co/ypPhqOeiK2

Any fan yelling “Overrated” at Bryce Harper is a joke lol

The Nationals swept the Reds in their three-game series. The Reds could barely get fans in the stands for their opening weekend which is sad. The Great American Ballpark deserves better. It is one of my favorite stadiums in all of sports but the Reds have totally shit the bed over the past couple of years, traded away crucial players, and the fans have evidently stopped caring. It’s a shame to see that gorgeous ballpark completely empty.