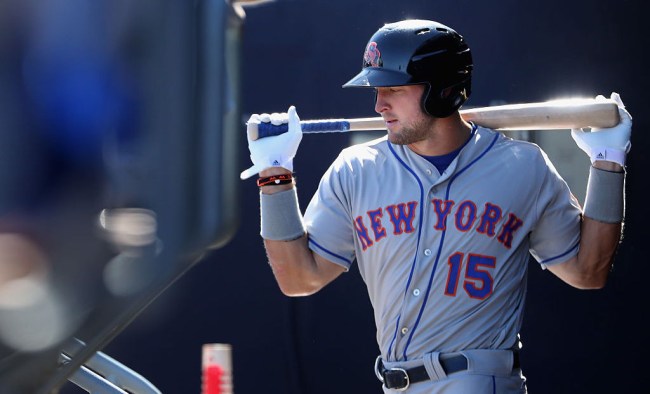 Recovering football player Tim Tebow might have struggled a bit during his brief stint at spring training with the New York Mets this year, but the star of the Binghamton Rumble Ponies pulled a Dennis Reynolds and inspired hope when he hit a home run during his first at-bat of the season (following in the footsteps of a proud tradition he started last year). Unfortunately, things only went downhill from there, and the ex-quarterback is currently sporting a batting average of .167 and has struck out half of the time he’s stepped to the plate this season.

It seems like it will be a while— if ever— before Tebow is playing alongside big names like Bryce Harper or Mike Trout, but if a recent poll conducted by ESPN is any indication, it appears the sporting world’s William Hung might have a higher profile than you’d think. A couple of weeks ago, Paul Hembekides, a researcher for the network’s newly-minted morning show Get Up!, revealed that a survey of fans found Tebow is considered the most popular athlete currently playing baseball— a stat he revealed on this morning’s episode.

I can’t tell you what the methodology behind the poll was or the metrics used to measure popularity, but I have a hard time believing Tim Tebow— TIM TEBOW— is currently the biggest name in baseball (as did Michelle Beadle).

When Hembo said Tim Tebow was the most popular active baseball player … pic.twitter.com/mm8JRpo56N

The conspiracy theorist in me can’t help but think this is just deliberate trolling by ESPN to drum up publicity for the new show, and if that is indeed the case, I have to give them some credit because they certainly got my attention.