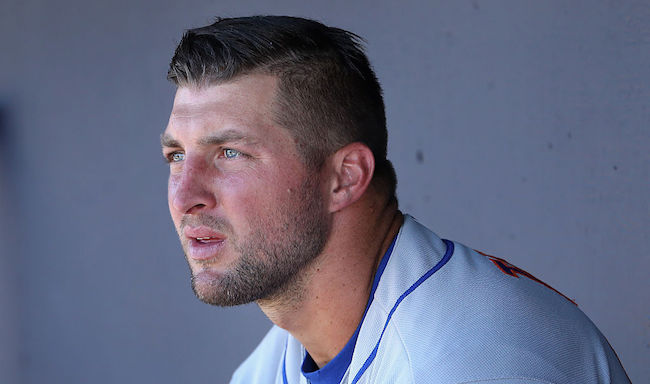 For most MLB teams, spring training is a great opportunity to gear up for the regular season and pull off some fun publicity stunts in the process. This is how we’ve ended up with Chris Berman managing the San Francisco Giants and Seattle Seahawks quarterback Russell Wilson getting unexpectedly traded from the Texas Rangers to the New York Yankees before suiting up for a game.

The New York Mets got in on the action early back in January when they announced they were inviting Tim Tebow to join the team at spring training after he spent the previous year in their minor league system. The former quarterback showed some promise in batting practice after bouncing some bombs off of a shed past the outfield fence, but his performance in practice didn’t translate very well to the actual games. The aspiring outfielder only managed to record a single hit in his 18 at-bats— which included a strikeout against Max Scherzer that took less than 40 seconds from start to finish— and his time with the MLB squad has officially come to an end after the Mets announced he was being sent home from spring training.

The team has 51 players left in big league camp.

According to MLB.com, Tebow blames a fluke ankle injury he suffered after tripping on a sprinkler for his underwhelming performance, but regardless of his explanation, you’re not going to make the majors with a batting average that’s lower than the BAC you need to get arrested for a DWI.

Tebow recently revealed he still has offers from NFL teams, but he doesn’t want to return to the sport unless he’s given the chance to play QB. I’d normally call him delusional, but if Sam Bradford can get $20 million from the Arizona Cardinals, anything can happen,