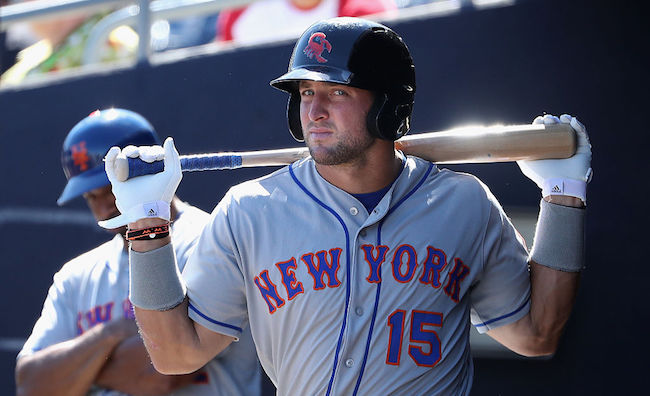 In 2016, Tim Tebow revealed there might have actually been a small typo in God’s plan for him when he announced he was going to pursue a career as a professional baseball player after the whole “NFL” thing failed to turn out like he’d planned. He eventually signed a minor league deal with the New York Mets and made everyone who’s already dismissed the possibility of the existence of hell a little nervous when drilled a home run on the first pitch of his career.

Tebow impressed the team’s scouts (and its marketing department) enough to officially earn an invite to spring training this year, and while things seem to be going pretty well so far, it’ll probably be a little while until he has his own locker in Queens. However, Tebow does appear to have a backup option if his new venture fails to pan out: football. Again.

Tebow recently sat down with Suzy Welch for CNBC to discuss a variety of topics, and over the course of the conversation, the former quarterback revealed that he still has offers from NFL teams willing to sign him as long as he agrees to play literally any other position but quarterback.

While asking Tebow how he decided baseball was the next step for him, Welch suggested that he must have come to a point where he realized he didn’t have a future in football. The former Heisman Winner deflected, saying, “It wasn’t like that. I mean, I still have offers to go play other positions…” before trailing off.

At least he’ll always have the XFL to fall back on.