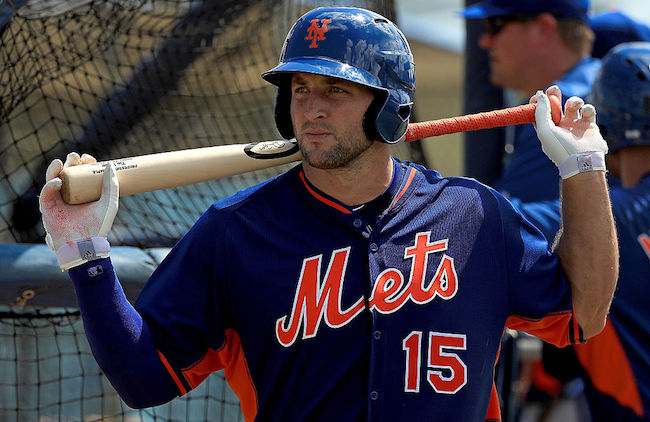 Last year, Tim Tebow set out on a quest to become a far less successful Deion Sanders when he announced he’d be pursuing a career in baseball before signing a minor league contract with the New York Mets after realizing the whole “football” thing probably wasn’t going to pan out. Tebow— who hadn’t played the sport since high school— hit a home run on the first swing of his professional career and was eventually promoted from Single-A— an achievement he celebrated by going yard in his first game with the St. Lucie Mets.

Tebow’s first season also featured a few notable moments that had nothing to do his play on the field, including a touching phone call to a grandmother who had recently suffered a stroke and an incident where he used his magical healing powers to help a fan who was suffering from a seizure, proving Tim Tebow can do no wrong except all of the things he did wrong on the football field.

However, it appears the former quarterback might have more of a future in baseball than most people would have ever assumed. On Friday, the Mets revealed the list of players they’ll be inviting to join them in Port St. Lucie for spring training, and Tebow was one of the nine players to make the cut.

Based on the enthusiastic reception Tebow received at virtually every stadium he visited during his inaugural season, there’s a chance the Mets only extended the invite in an attempt to make their fans give a shit about spring training. With that said, you have to give him some credit for being able to capitalize on a pivot that virtually no one saw coming.