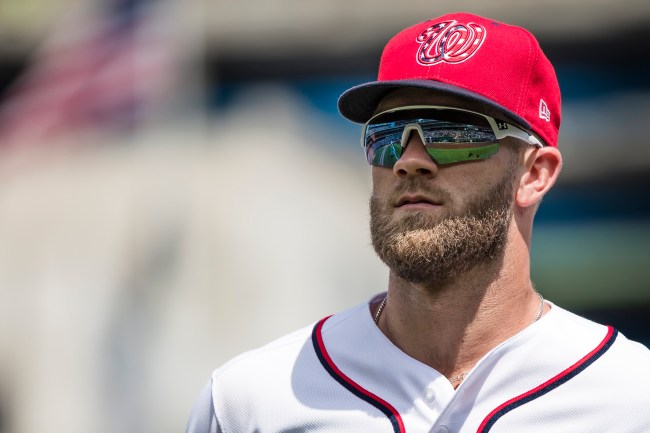 Bryce Harper just signed a record contract with the Philadelphia Phillies that’ll see the All-Star outfielder $330 million over the next 13 years, meaning the current 26-year-old will be 39 years old by the time the deal ends. Basically, Harper made the decision that, in this wild free-agency decision, he was looking for only one team to finish his career with. In fact, that was what he instructed his super agent, Scott Boras, to negotiate — and it may have left a little money on the table at the end of the day.

While Bryce Harper’s not complaining about averaging $25.3 million each season during the deal, reports came out that there were other offers that would have paid the 2015 NL Most Valuable Player nearly $20 million more per season — although the length of the contract wasn’t going to be for 13 years. That’s according to a piece from Tom Verducci of Sports Illustrated, who interviewed Harper’s agent, the aforementioned Boras, about how the negotiations went down, as well as getting some insight as to some of the other absurd offers teams were throwing at the player.

According to the SI article, Boras said that, from the beginning, he wanted the record deal — which was recently broken by Manny Machado, who signed a $300 million deal with the San Diego Padres just last week — and that Boras was to “prioritize length of contract.” With the Phillies initially offering 10 years, which had been on the table for months, when the San Francisco Giants and Los Angeles Dodgers swooped in after spring training began a few weeks ago, the Phillies felt the pressure to raise their offer to 13 years. So, in a way, the stale market for Bryce Harper led to him getting even more years to his Phillies deal.

But, how did it happen — and what were some of the other offers for Harper? Here’s what Verducci was told by Scott Boras, per Deadspin, via SI.com.

“It took a hell of a long time to get those [last three] years,” Boras said.

Starting with the Friday dinner, it took one last whirlwind of a week for Boras to work his stagecraft and get the years needed to surpass the Stanton contract. On Saturday the Middletons ate with the Harpers again, this time for lunch before John and Leigh zipped back to Florida on their private jet. On Sunday, with the exhaust from Middleton’s jet barely dissipated, a contingent from the Dodgers flew into McCarran Airport in Las Vegas to offer Harper a record amount of money per year, but only on a deal covering four or five years. (The top average annual value bid to Harper was $43 million; Boras would not confirm it was from the Dodgers.) On Tuesday, right behind their divisional rival, the Giants jetted in with a 12-year offer worth around $310 million. All the stagecraft had the desired effect.

On Thursday morning Middleton called Boras to offer $330 million over 13 years. Boras hung up the phone and at 11:34 am PT he called Harper. Kayla joined Bryce on the phone.

Although there’s speculation as to what other deals and teams were involved in the Bryce Harper sweepstakes, one well-known baseball writer, Jon Morosi, anticipated that the Dodgers’ offer was a short-term deal for four years and $180 million. In other words, it’d be an average annual salary of $45 million; which is just nuts. It’d also make Bryce Harper a free agent again at age 30, which would have, had he stayed healthy and productive, given him a chance for one last long-term deal to finish out his career.

In Bryce Harper talks, I am told #Dodgers were willing to offer a four-year deal worth approximately $45 million per season. That would have allowed Harper to shatter the all-time AAV record and become a free agent at age 30. @MLB @MLBNetwork

Instead, Bryce Harper decided to take the sure thing — and the additional three years that’ll pay him $20 million each season from ages 37-39, regardless of his production. That’s a wise strategy, and, while Harper’s average annual salary isn’t the record, his $330 million is; which is what he wanted in the end.

In anticipation of Bryce Harper joining the Phillies, fans of the team have already, reportedly, bought more than 100,000 tickets after the deal was announced. The outfielder also increased the Phils’ World Series odds, taking them from 14-1 to 12-1, so it’s clear that both sides are happy with the contract — which is good, considering they’re, presumably, stuck with one another for the next 13 years.