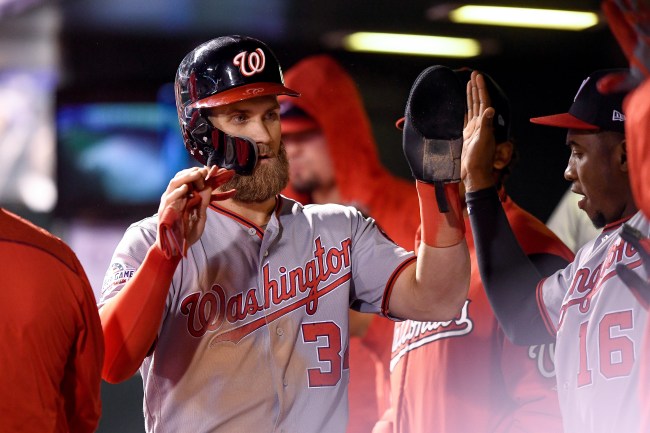 Bryce Harper is a superstar who is about to be a very, very rich man. At 26 years old, the current Washington Nationals outfielder has already won an NL MVP award, been selected to the All-Star Game six times and has reached the postseason four times, proving that he was worthy of all the hype after being taken No. 1 overall by the Nats in the 2010 MLB Draft.

Although Harper and his agent, Scott Boras, reportedly turned down a massive, $300 million deal from the Nationals at the end of the regular season as the player becomes a free agency, there’s a new report that just came out from The Athletic‘s Ken Rosenthal, via SI.com, that says Washington nearly dealt the then soon-to-be free agent back in July during the MLB trade deadline. And, as the headline reads, it was to the defending World Series champs at the time, the Houston Astros.

Here are some of the details from Rosenthal’s report, per The Athletic.

What if the Houston Astros had acquired Bryce Harper at the non-waiver deadline?

The Astros had a trade in place for Harper on July 30, but the deal collapsed when Washington Nationals ownership refused to approve the move, according to major-league sources.

For Harper, the Nationals would have obtained right-hander J.B. Bukauskas, the Astros’ No. 8 prospect according to MLBPipeline.com, and two other minor leaguers, sources said. Catcher Garrett Stubbs, the team’s No. 15 prospect, was in play.

At the end of the day, though, the deal fell through because Nationals ownership didn’t agree to the terms. But, man, how crazy would that have been?

Considering the Astros won their second-straight AL West title by finishing the season with a 103-59 record, while also reaching the ALCS, a deal for Bryce Harper would have been scary to even think about — while not giving up any of their core guys like Jose Altuve, Alex Bregman or George Springer, among others.

Although the Bryce Harper trade died during the MLB Trade Deadline over the summer, is it something we could possibly see come to fruition this winter during the Hot Stove season? Doubtful, given Harper having the control of his own destiny, but it will be really interesting to see where the All-Star ends up, and if he’ll join the likes of a superteam who’s ready to drop record-breaking cash for his services.