Bryce Harper On MLB’s Decision To Implement Precautions To Protect Players From The Coronavirus: ‘I Just Live My Life’ 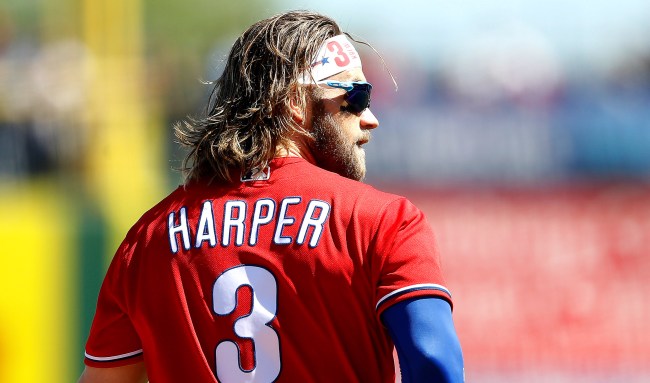 Earlier this week, Major League Baseball, Major League Soccer, the NBA, and the NHL announced that the media will no longer have clubhouse or locker room access to their players and coaches due to the coronavirus outbreak.

“Given the issues that can be associated with close contact in pre- and post-game settings, all team locker rooms and clubhouses will be open only to players and essential employees of teams and team facilities until further notice,” the statement read.

This measure struck some as unusual in that it only protects the players and not any of the thousands of fans who potentially will be in attendance at the leagues’ games.

A point that one infectious diseases expert from the Duke University health system elaborated on in a discussion with Yahoo! Sports.

“I think what’s becoming clear is that for younger, healthier individuals, they don’t necessarily feel super sick. And so they may not feel sick enough to give up their basketball ticket, or the first game of the Mets,” said Cameron Wolfe, associate professor of medicine in the division of infectious diseases. “And so they’ll show up, unaware that the 80-year-old that’s got the ticket beside them is actually much more prone for a much more severe outcome should they get the virus as a result.”

When asked for his take on the media ban on Tuesday, Philadelphia Phillies star Bryce Harper’s response either shows that he’s one of the most laid-back individuals in sports or that he thinks Major League Baseball may be overreacting a bit.

“I live, man,” said Harper about the coronavirus threat, reports Jim Salisbury of NBC Sports. “I don’t worry about a disease or a virus. I live my life. I’m doing everything the same. I’m shaking people’s hands, I’m high-fiving. I’m healthy. I’m 27. The people that are affected, it’s a lot of older and maybe some young, as well. But I just live my life.”

Per MLB edict, Harper spoke with reporters outside the Phillies’ clubhouse and he kept a distance of about eight feet.

He made it clear that he was just following the rules and at one point seemed to acknowledge the absurdity of it all by saying he wouldn’t hesitate to give one of the scribes a hug.

“You guys have a job to do,” Harper continued. “We have to understand you have to do a job. We need to talk to you, we need to. As of right now, I guess it’s going to be out here, but hopefully in the near future you guys are back in there with us and we’re just going on with our daily routine of talking to you guys.

“I think we’re all in uncharted territory. We’ve never seen this. We’ve never done this. I think everybody is trying to do what is right, I guess you could say.”

Harper added that he gets it if fans chose not to attend games over their fear of becoming infected.

“If fans still want to come and watch us play, then we respect that. We want that. If they don’t want to because they want to protect their families, I understand that, too. I have a family at home as well. There’s no need for me to get sick or my family to get sick or my son, who was just born.”

In the meantime, Harper is just going to continue to be Harper.

“I’m just doing my thing every single day, the same way,” he explained. “I go out to eat. I get in my car and drive to the field. I pick up baseballs in the cage. I feel safe in my clubhouse with the guys who are in there. If I cough up a lung then, I don’t know, you know what I’m saying? I feel bad for the people that have been affected by it. No one wants to see anybody get sick. That’s a bummer. But I’m healthy right now and I want to stay in a good mental state and just do my thing on the field. If it gets to the point where it gets really bad, then we’ll figure it out from there.”