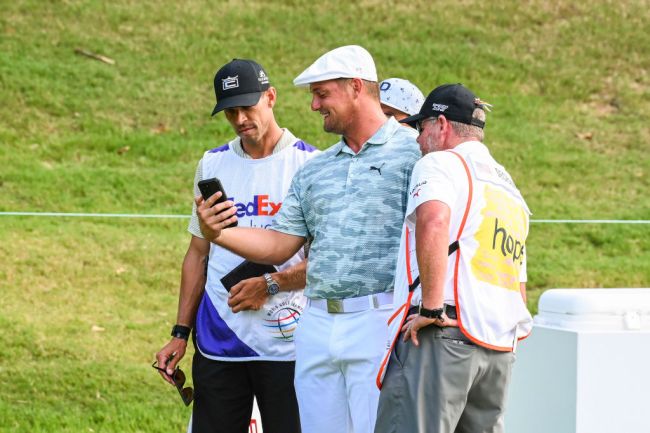 Outside of being one of the top golfers in the world, Bryson DeChambeau is known for his unique style and unusual equipment. This is a guy that has single-length irons, has teased an extra-long driver shaft, and wears a driver cap.

So, with that in mind, it shouldn’t be at all surprising that he’s an Android guy. DeChambeau’s phone choice caused some issues at the Ryder Cup, too.

Ahead of this week’s Shriners Hospitals for Children Open, Scottie Scheffler was asked whether or not the team’s group chat had cooled off at all since the conclusion of the event.

Instead of talking about whether or not the group chat was still popping off, Scheffler decided to let the world know that DeChambeau is the green text message guy in the group.

“Honestly, our group chat was a little bait of a pain in the butt because Bryson is the only one who does not have an iPhone,” Scheffler explained. “I know that’s really a shock that Bryson’s the odd man out on that one. But we gave him some crap about that in the beginning of the week.”

If you were to ask 100 golf fans to guess who on the U.S. Ryder Cup team had an Android, 100 would guess DeChambeau.

Folks on Twitter weren’t shocked by the news of DeChambeau being an Android dude at all and had some hilarious reactions to the news.

Nothing makes more sense to me than Bryson DeChambeau having an Android. https://t.co/dqROWQjZka

I would have bet my mortgage that Bryson is an android guy https://t.co/F4J2WgitNv

It coming out that Bryson was the only Ryder Cup player in the group text with an Android might do more damage to his rep than any of his prior transgressions.

You can go ahead and guarantee that Brooks Koepka will somehow make a joke about DeChambeau having an Android when they square off in ‘The Match’ on November 26.