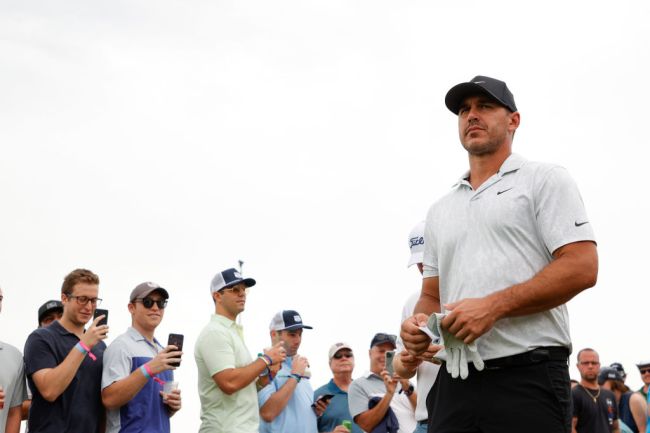 It’s officially been announced that Brooks Koepka and Bryson DeChambeau will take each other on in the latest edition of ‘The Match.’ While most golf fans can’t wait to see these two square off after all the drama that’s unfolded, Koepka doesn’t seem all that excited to take on his rival.

Koepka is teeing it up in this week’s Shriners Hospital for Children Open and was of course asked about the upcoming match as this was the first time he’s spoken with the media since the announcement.

He made it pretty clear that he didn’t want to talk about it.

Here’s Koepka’s exchange with reporters while being asked his thought about ‘The Match’:

Q. With the news yesterday coming about The Match, curious how that came to be, when discussions started for that and what your thoughts are on that.

Koepka: Yeah, I mean I think we’re excited. So it’s going to be good, you’ll see it, what, the day after Thanksgiving.

Q: When did discussions for that begin, when did that sort of conversation start?

Koepka: I don’t know. You can ask Bryson.

Just absolutely riveting stuff from Koepka. Those comments will surely get fans amped up for ‘The Match.’

This is just the latest example of Koepka trying to act as cool and tough as he possibly can.

‘I think we’re excited?’ Who are we? Then acting like he had absolutely nothing to do with the planning of the event at all, telling the reporter to go ask DeChambeau about when those conversations started? It’s all strange, but it’s also on-brand for Koepka.

This is the demeanor that Koepka has taken on over the years and certainly throughout his rivalry with DeChambeau that started almost two years ago now.

Both Koepka and DeChambeau will be mic’d up during the 12-hole match in Las Vegas on November 26. Let’s hope Koepka is a little more talkative during those three hours than he was when asked about the event.