Brooks Koepka Shares Origin Story Of Bryson DeChambeau Rivalry: ‘He Went Back On His Word’ 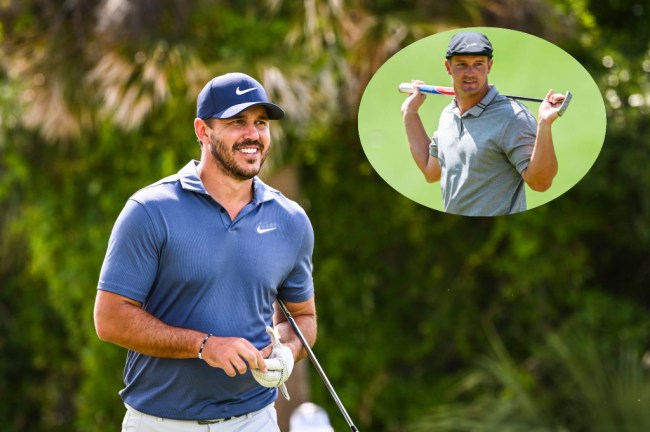 The Brooks Koepka – Bryson DeChambeau beef has been dominating the golf world for a full month now, but the origin story behind their rivalry still remained a mystery.

Was Koepka the one to start things when he complained about slow players during a tournament a couple of years back? Maybe it was DeChambeau calling out Koepka’s lack of abs during a live stream that lit a fire under Koepka?

Every golf fan has taken a guess as to where this all started, but now Koepka has finally given his side of the story.

During his Wednesday press conference ahead of this week’s Travelers Championship, the four-time major winner gave his opinion as to where the rivalry really began. Based on his comments, it sounds like it started at the 2019 Northern Trust at Liberty National.

“I thought it was just interesting when he walked up to my caddie and told Ricky (Elliott) that if I had something to say, to say it to his face,” Koepka said. “I thought that was kind of odd, when you don’t walk up to my face, and say it to my caddie.”

This is the theory we’ve been rolling with in our coverage of the rivalry ever since the video was leaked of Koepka rolling his eyes at DeChambeau at the PGA Championship last month.

DeChambeau took over two minutes to hit an 8-foot putt during the Northern Trust that year, which Koepka didn’t appreciate seeing. Koepka had voiced his frustrations with slow play, and it was later reported that DeChambeau approached Koepka’s caddie at the tournament saying that if Koepka has a problem with the way he plays, he should talk to him about it face-to-face. Koepka’s comments at the Travelers confirm that happened.

Koepka, during his Wednesday presser, also went on to explain that he and DeChambeau had come to some sort of agreement.

“And when we had that conversation, we agreed on something and he went back on it,” Koepka said. “So, if you’re gonna go back on your word, I don’t have much respect for that.”

Koepka explaining the origins of the rivalry comes just a day after he told SportsCenter that he’s gotten great support from fellow PGA Tour players and the Tour itself for calling out DeChambeu.

While many assumed that the 2019 Northern Trust is where this all kicked off, it’s nice to know that it is indeed the time and place of origin.