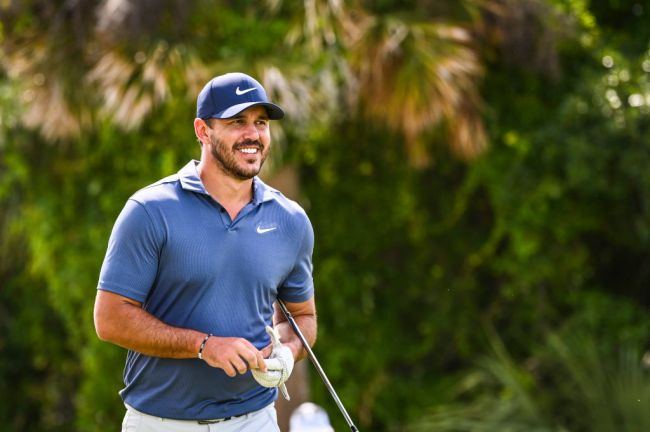 It’s been a full month since the video was leaked of Brooks Koepka showing the world just how little he can stand Bryson DeChambeau and we’re still talking about it. That’s not a bad thing, either, golf needed a rivalry like this. Let this be yet another nod that the USGA swung and missed by not pairing the two together for the first two rounds of the U.S. Open.

Whether some of the back-and-forth is fabricated or these two genuinely despise one another doesn’t really matter, people are talking about and tuning into golf.

Koepka joined Tuesday’s afternoon edition of SportsCenter to talk about this week’s Travelers Championship in Connecticut. Matt Barrie saw this as the perfect opportunity to do some more digging into the Koepka – DeChambeau beef and asked what the response has sort of been like from fellow PGA Tour players in regards to the leaked video.

“There’s been a few laughs. A few ‘I can’t believe you did that, but I’m glad you did,'” Koepka explained.

“It’s been fun, I’ve gotten a good response from a bunch of guys on the Tour, from everybody from the Tour. It’s been something I think everyone has enjoyed. I’m definitely changing up the game a little bit.”

Barrie also threw out the hypothetical of DeChambeau coming up to Koepka this week offering to settle things over a few beers. Koepka explained that “there’s not much to talk about” and that “this whole thing started basically because of him.”

The History Between Koepka And DeChambeau

Koepka and DeChambeau have traded shots on Twitter on many occasions, but this whole rivalry seems to have started at the 2019 Northern Trust Open. DeChambeau took over two minutes to hit an 8-foot putt during the tournament, which Koepka didn’t like seeing.

Koepka has voiced his frustrations with slow play, and it was later reported that DeChambeau approached Koepka’s caddie at the tournament saying that if Koepka has a problem with the way he plays, he should talk to him about it face-to-face.

Plus, you had Koepka essentially accuse DeChambeau of using steroids in reference to his quick bulk-up just after winning the 2020 Rocket Mortgage Classic. There was that whole incident with the ants in Memphis, too.