Brooks Koepka, Bryson DeChambeau Set To Play In Latest Edition Of ‘The Match’ 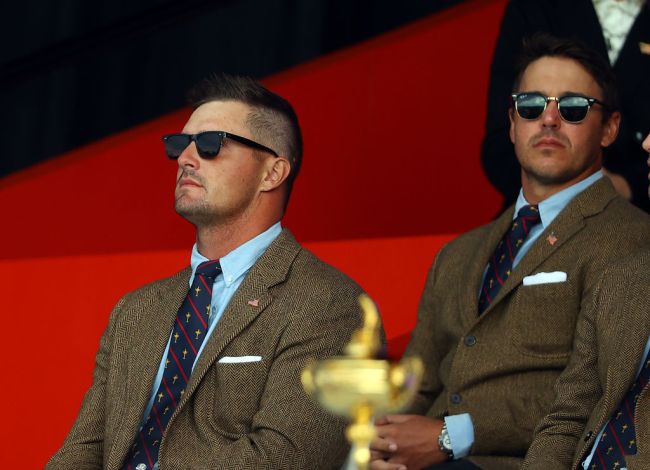 While it’s no surprise, it is officially official now, Brooks Koepka and Bryson DeChambeau will take on one another in the latest edition of ‘The Match.’

Koepka and DeChambeau have been going back-and-forth for months now, and to see the two square off head-to-head will certainly have plenty of golf fans out there intrigued.

The match will only be 12 holes and will take place in Las Vegas at The Wynn Golf Club on November 26, the day after Thanksgiving. This will be the fifth edition of ‘The Match’ with the first featuring Phil Mickelson and Tiger Woods back in 2018.

According to GOLF, both DeChambeau and Koepka will be mic’d up for the match while Charles Barkley and Ernie Johnson will be on the call for the event.

The format of the match itself has not been announced just yet.

The Brooks vs. Bryson Rivalry

The feud between DeChambeau and Koepka has been well-documented as it dates all the way back to January of 2019 when Koepka made a dig about DeChambeau’s pace of play. This led to a confrontation at the 2019 Northern Trust and things escalated from there.

The two have taken shots about each other’s physique, trophy cabinets, and many other things over the past couple of years as well.

Things calmed down between the two for a bit, but that quickly changed at the 2021 PGA Championship. A video leaked of a Koepka interview showing him roll his eyes and curse after DeChambeau walked behind him on camera.

Between the video leak and now, we’ve had other situations pop up between the two. Koepka’s fans started calling DeChambeau ‘Brooksy’ all of the sudden which understandably rubbed Bryson the wrong way. The PGA Tour later threatened to kick fans out of tournaments who call DeChambea ‘Brooksy.’

A few other minor ruffling of the feathers happened between the two following all of that, but you get the point, the two aren’t best friends, let’s put it that way.

Nevertheless, DeChambeau and Koepka put their differences aside at the Ryder Cup and helped lead the Americans to a historic 19-9 win. The two even hugged a couple of times after the U.S. won the event.

🚨We’ve got ourselves a Bryson and Brooks hug.🚨 pic.twitter.com/3Yb300AUdc

It’ll be interesting to see if a new chapter of the rivalry is added at ‘The Match’ or the book on this drama is officially closed with this event. I think most wouldn’t mind seeing this ‘feud’ die off sooner rather than later, even though it has helped grow the game in a sense.