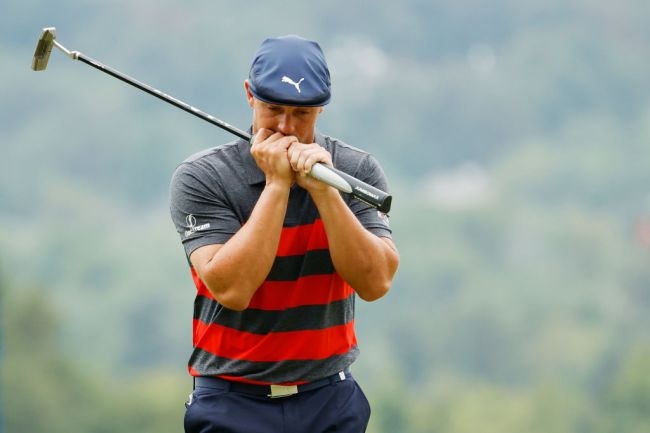 Bryson DeChambeau and Patrick Cantlay put on an absolute show during their six-hole playoff at the BMW Championship. It was one of the most entertaining playoffs the sport has ever seen with DeChambeau’s length off the tee, Cantlay’s insanely hot putter, and both players not giving an inch.

Cantlay eventually won by making a lengthy birdie putt on what was the fourth time the pair played the 18th hole in the playoff. On his journey from the 18th green to the clubhouse, with emotions obviously running high after suffering a loss, DeChambeau reportedly snapped at a fan who chirped him.

According to ESPN’s Kevin Van Valkenburg, a fan shouted “great job, Brooksie” which has become a common jab that fans have thrown DeChambeau’s way throughout his well-documented beef with Brooks Koepka.

That particular fan took DeChambeau to his boiling point as he reportedly turned around to the fan and yelled “You know what? Get the f-ck out!” with “rage in his eyes,” according to Van Valkenburg. He also wrote that he heard shouts of ‘Brooksie’ lobbed DeChambeau’s way at least a dozen times throughout the week.

Fans were openly – and very loudly – rooting against DeChambeau at the WGC FedEx St. Jude Invitational in Memphis a few weeks ago as well. Fans in Memphis seemed to take things up a notch, and you could certainly make the argument that they got in his head during his back-nine collapse that Sunday.

A woman in Memphis shouted “Brooksie” at DeChambeau on the 17th hole on Sunday, to which he responded by saying “good one.”

Fans chirping DeChambeau is nothing new, and there are no signs of these antics slowing down. DeChambeau obviously goes to the. beat of his very unique drum with anything he does and he’s become an easy target for golf fans that don’t appreciate his approach to things.