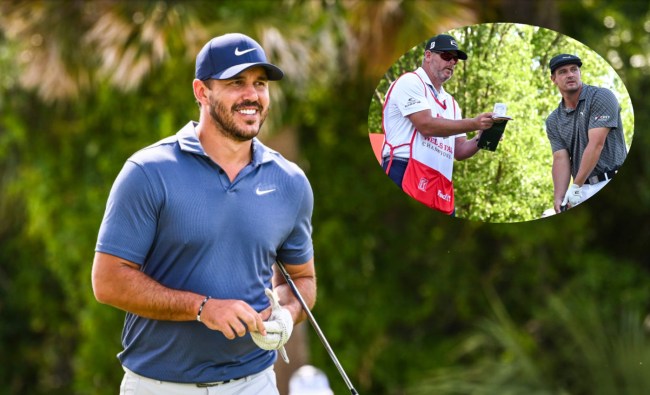 Players and caddies part ways quite often, but the timing of Bryson DeChambeau and his longtime caddie Tim Tucker calling it quits is interesting, to say the least.

The news, first reported by No Laying Up, made the rounds quickly on Thursday morning and Brooks Koepka wasted no time inserting himself into the situation by trolling DeChambeau on Twitter.

Koepka decided Thursday afternoon was a good time to give a shoutout to his “best friend and greatest caddie to do it” Ricky Elliott. Koepka’s troll game remains next level as his rivalry with DeChambeau continues to roll on.

Couldn’t do it without my guy Rick! Best friend and greatest caddie to do it💯 @RickyElliott appreciation day! pic.twitter.com/cNvD2VX8Nh

What makes the timing of the split between DeChambeau and Tucker so interesting is that the news broke just hours ahead of his opening round tee time at the Rocket Mortgage Classic. Tucker was carrying the bag for DeChambeau on Wednesday afternoon during his practice round.

DeChambeau’s agent told GOLF (an outlet DeChambeau is a player editor for) that Tucker wasn’t fired, but that the decision to split was mutual.

“All good things come to end,” DeChambeau’s agent said. “Bryson and Tim are grateful for all the great times they had together. Like any player-caddie relationship, it ran its course. They mutually decided it was time to move on and both wish each other all the best in their future endeavors.”

This doesn’t make any sense whatsoever.

Why would a player and caddie decide to mutually part ways hours prior to the start of a tournament, especially one that DeChambeau is the odds-on favorite to win? Tucker has arguably had the toughest job of any caddie in golf over the last few years with DeChambeau getting more and more technical, but he’s also earned quite a bit of money carrying the bag for eight of DeChambeau’s wins.

There’s more to the story when it comes to DeChambeau’s split with Tucker, there has to be, but we’ll likely never hear what actually happened.