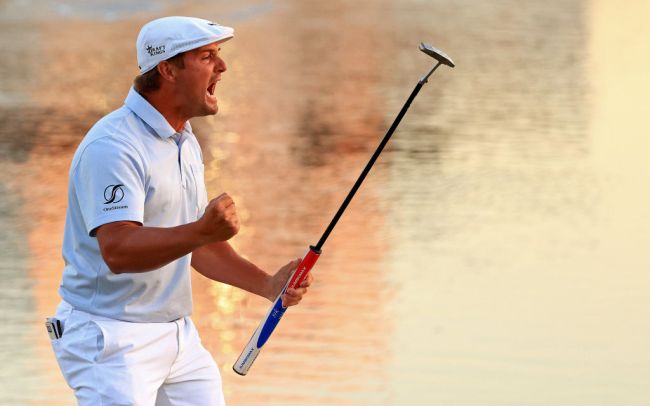 Bryson DeChambeau earned his eighth win on the PGA Tour at the Arnold Palmer Invitational last week after overpowering Bay Hill. Sunday did not lack any drama as Arnie’s place showed its teeth by playing firm and fast with more than enough wind to make it a stiff test for everyone in the field.

DeChambeau was one of only two players inside the Top 10 to shoot under par in the final round and was forced to make a knee-knocking par putt on the 72nd hole to hold off 47-year-old Lee Westwood by a shot. So, how does one celebrate picking up win No. 8 and a $1.6 million check? By downing some chocolate milk, eating some gummies, and playing pinball, of course.

DeChambeau shared what the celebration looked like on Sunday night with the media ahead of this week’s Players.

“I went into the locker room afterwards and hung out with quite a few of the folk there. I had a chocolate milk and I had some Arnold Palmer gummies. It was like iced tea and lemonade gummies. That was kind of funny, it was kind of a tribute to him,” DeChambeau explained.” We had a little bit of champagne, as well, and popped a bottle. That was fun.”

“I’ll also say, when I went back, I was staying at a host family’s house, they’re great friends of mine and they were nice enough to host me all week in this beautiful home and I played some pinball, funnily enough. They had a pinball machine downstairs, so I was playing that for a little while. And then 11:00 to 12:00 comes around and I’m just in bed getting ready to come up to THE PLAYERS Championship for this week.”

Chocolate milk and gummies wouldn’t be my go-to after becoming $1.6 million richer, but this sort of stuff is what makes Bryson, Bryson. I suppose you have to tip your cap to him for being authentic? He could’ve given a bland answer about hanging out with friends and family, but the fact that he went into detail about the chocolate milk and gummies is honest, at least, no matter how strange it is.

DeChambeau took down a steak and some pizza following his U.S. Open win along with some protein shakes, but I supposed those sorts of celebratory meals are reserved for major championships.