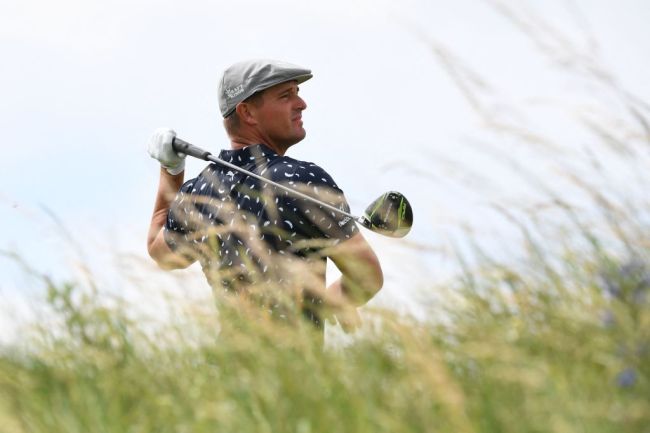 Bryson DeChambeau carded a 1-over 71 in the opening round of The Open on Thursday; not bad, not great. After the round, he complained about his Cobra driver, and surprisingly, Cobra had a response for the No. 6 player in the world.

DeChambeau hit less than 30% of his fairways in round one, well below the tournament average thus far, and offered up a telling quote about his driver following his opening 18 holes. To him “the driver sucks.”

“If I can hit it down the middle of the fairway, that’s great, but with the driver right now, the driver sucks,” DeChambeau explained. “It’s not a good face for me, and we’re still trying to figure out how to make it good on the mis-hits. I’m living on the razor’s edge, like I’ve told people for a long time.”

That’s not exactly what you want to hear if you’re Cobra. DeChambeau is the best player on its staff and him flat-out saying his driver sucks isn’t going to sit all that well with the manufacturer.

In a shocking development, Cobra actually responded to DeChambeau’s remarks.

Ben Schomin, who not only is Cobra’s tour operations manager, but he’s also the man that caddied for DeChambeau just two weeks ago at the Rocket Mortage classic after DeChambeau and his long-time caddie parted ways.

Mr. Schomin did not hold back, telling David Dusek at Golfweek that everyone is “bending over backwards” to try and build a driver that meets DeChambeau’s standards. He also explained that Bryson is just never happy.

“Everybody is bending over backwards. We’ve got multiple guys in R&D who are CAD’ing (compute-aided design) this and CAD-ing that, trying to get this and that into the pipeline faster. (Bryson) knows it,” Schomin said. “It’s just really, really painful when he says something that stupid.”

“He has never really been happy, ever. Like, it’s very rare where he’s happy,” Schomin said. “Now he’s in a place where he’s swinging a 5-degree driver with 200 mph of ball speed. Everybody is looking for a magic bullet. Well, the magic bullet becomes harder and harder to find the faster you swing and the lower your loft gets.”

You never, ever, see this sort of drama between a player and a club manufacturer, which makes this story that much more entertaining.

Personally, Schomin’s quote about it being harder to find the “magic bullet” with DeChambeau’s swing and low loft is my favorite. That’s a direct shot at DeCahmbeau who claims to know practically everything there is to know when it comes to physics.