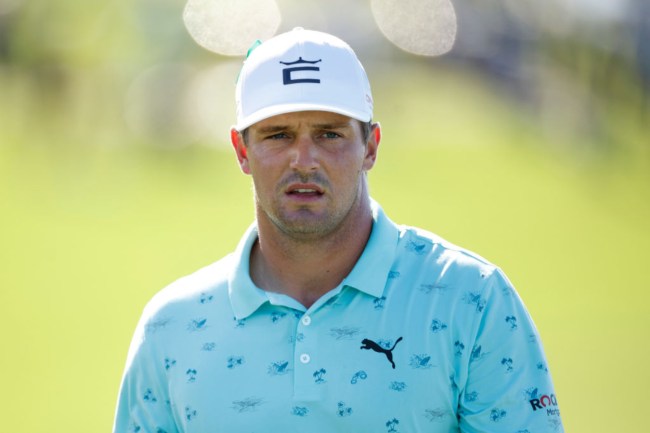 Netflix and the PGA Tour shared a list of 22 players that will be featured in a new docuseries coming to the streaming giant and there were a few notable names missing.

While five of the top seven players in the game will be a part of the show, the likes of Tiger Woods, Rory McIlroy, Phil Mickelson, and Bryson DeChambeau won’t be a part of the festivities.

Mickelson, Woods, and McIlroy refusing to be a part of the show isn’t all that surprising, but it did seem a bit odd that DeChambeau wouldn’t want to jump to the opportunity.

Ahead of his appearance at the Saudi Invitational this week, DeChambeau explained why he refused to be a part of the show.

While you can appreciate the honesty in his answer, you can also say his explanation came across as arrogant.

“There’s a lot of great people on there. If I was to go on there, yeah, it would be cool to see, but I feel like there’s a lot more interesting stories,” DeChambeau explained, according to Golf Channel.

“You’ve got Harry Higgs. You’ve got numerous others. I don’t want to take the light away from them for their potential to grow themselves in a manner that’s unique to them. They have the opportunity to grow a lot more than I do in that regard.”

Not wanting to “take the light away” from someone else is quite the quote. Also, what’d Harry Higgs ever do to Bryson, Higgs is already one of the most beloved players on Tour.

DeChambeau’s Message Is Loud And Clear

It’s easy to understand what DeChambeau is saying here seeing as how he quite literally spelled it out, he wants lesser-known guys to have their spot to shine.

The thing is, he didn’t have to deliver that message in the manner he did, or at all.

Why not just say ‘I didn’t see the show being a fit for myself and my team, but I’m looking forward to seeing everyone else throughout the series’?

DeChambeau is honest more often than not, but he has trouble getting out of his own way.