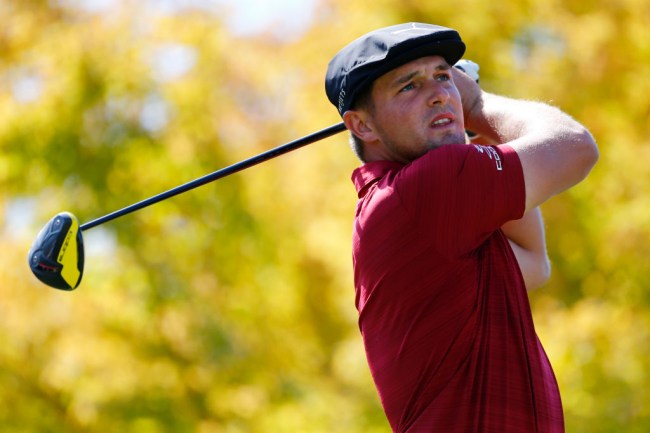 Pace of play has been one of the biggest talking points in the game of golf over the past few months.

We all remember J.B. Holmes getting roasted at The Open for his glacial pace. World No. 1 Brooks Koepka has been extremely vocal about the issue and the European Tour even announced a new strategy to combat slow play.

One man that’s caught a ton of flack has been Bryson DeChambeau, both from the majority of golf fans and Koepka who called him out saying it’s not that hard to hit a golf ball and the whole issue is embarrassing.

Well, DeChambeau disagrees and is now claiming that there is secret PGA Tour data that proves that he’s not a slow player.

“There’s data out there now that shows that I am not the slowest player at all by any means,” he told GOLF. The funny thing is, he can’t really explain the data. “Well, the PGA Tour has it. I’ve seen it. I don’t know if I can disclose any of it. I’m not going to, unfortunately, but I’m definitely not in the top 10 percent. I’m not close to that. That’s from ShotLink data, we have that. So I can say that, I know I can say that without a shadow of a doubt.”

Yep, this is certainly a quote.

There’s some sort of secret data the PGA Tour holds that shows a notoriously slow player that he’s not slow and instead of releasing it to cut out all of the drama they’re just not going to? That’s an interesting move. Then again, let’s not forget the PGA Tour is a ratings business just like everything else on television.

It’s strange to type ‘secret data’ while writing this story about golf and a slow player, but here we are. Nevertheless, there may be some sort of secret data, but there’s also visual data the entire world has seen of DeChambeau taking over two minutes over an eight-foot putt he missed at The Northern Trust.

JT looks at his imaginary watch at the 1:40 mark of the video. More like DeCham-slow🙃pic.twitter.com/qW1whoda4o

One thing that isn’t a secret is that DeChambeau always brings some sort of entertainment. Love him or hate him, he does move the needle a bit whether that be people watching because he’s an exceptional talent (you can’t argue that) or the fact they’re waiting for another slow-play moment they can torch him about.