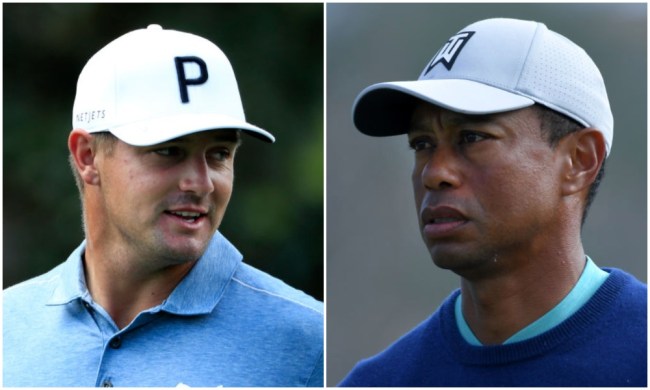 Thanks to his bulk up and newly acquired distance off the tee, Bryson DeChambeau is the talk of the PGA Tour. Not only has he put on 40+ pounds in lightning-quick fashion, but he’s also earned a win and three other Top 10 finishes in his four starts since the Tour resumed its season in June.

He’s honestly turned into appointment viewing for any golf fan and his fellow competitors, including Tiger Woods.

Woods and DeChambeau are friends and have played a lot of golf together over the past few years, but with this week’s Memorial Tournament being Woods’ first start on Tour since February, he decided to play nine holes during Wednesday’s practice round with DeChambeau.

DeChambeau was the one that arranged the Wednesday practice round with Woods and after their practice session together he offered up high praise to The Big Cat. The compliments he gave, however, were certainly unique as he talked about Woods in the past tense.

“Back in the day, he was it,’’ DeChambeau said. “He was the golden star. He was the one everybody looked up to.’’

Yep, DeChambeau went there. ‘He was it,’ he ‘was the golden star, the one everybody looked up to.’

It’s not too often you hear or even read comments about Woods in the past tense. In fact, I can’t think of another player or member of the media referring to Tiger in the past tense, but this is DeChambeau we’re talking about here, he does things differently and oozes confidence.

We’re barely a year removed from Woods completing perhaps the greatest comeback in sports history winning his fifth green jacket. Woods also won the ZOZO Championship back in October and was dominant at the Presidents Cup in December; it’s far too early to even start thinking of Woods in the past tense.

It’s safe to assume DeChambeau meant absolutely no harm with these comments, but it’s certainly a unique choice of phrasing, to say the least.