Bryson DeChambeau, His Bros, And The U.S. Open Trophy Have A Wild Saturday Night Workout Session 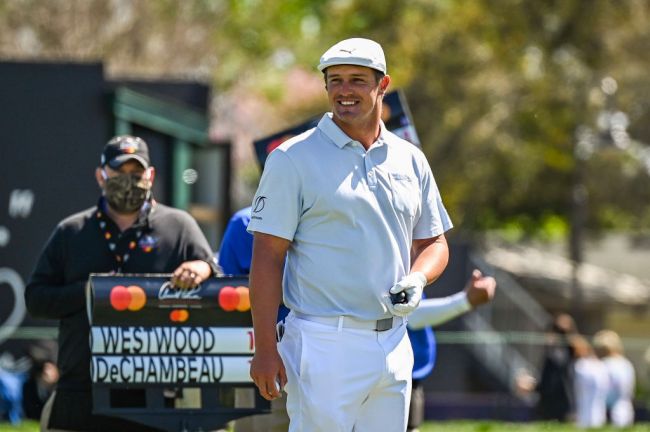 In case you weren’t aware, Bryson DeChambeau works out, a lot. To put on 40-ish pounds and become the longest hitter on the PGA Tour in a short stretch of time, that requires some serious work ethic, but that doesn’t mean he doesn’t have fun with his workouts.

After not advancing to the knockout stages of the WGC-Dell Technologies Match Play, one might assume that he would take the weekend off, but the 27-year-old has his sights set on the Masters in two weeks, so taking a weekend off doesn’t appear to be an option for him. So DeChambeau’s Saturday night consisted of an intense, obviously tongue-in-cheek workout session with the bros and his U.S. Open trophy.

Hogan Molthan, who is in the golf and fitness space and clearly a buddy of DeChambeau’s, shared the intense, somewhat funny, and somewhat cringy clip to TikTok.

To Bryson’s credit, the man doesn’t skip leg day, which is something millions, including myself, can not say.

As for the clip itself, it’s more cringe than funny, but I think that was the ultimate goal here. It’s obviously not meant to be taken seriously at all, the man’s literally doing leg curls while his buddy holds the U.S. Open Trophy in front of him.

DeChambeau is free to spend his Saturday night however the hell he wants. It’s fine that he celebrated his win at the Arnold Palmer Invitational with chocolate milk and gummies, that’s his brand. Whatever he’s doing is working, too, not many people on this Earth can walk into their garage past their Bentley with the U.S. Open trophy in hand and rip out some leg curls.