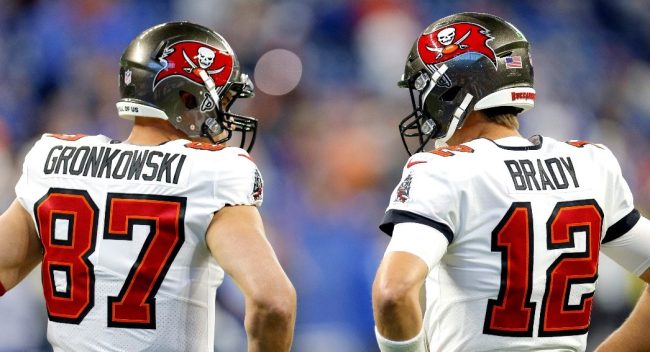 The Tampa Bay Buccaneers are preparing for what should be an exciting season. Tom Brady is back under center once again, however, it looks like he’ll be playing without his long-time teammate Rob Gronkowski. Even so, the Buccaneers just may have found a replacement for Gronk as rookie tight end Cade Otton has been balling out in training camp.

Cade Otton Stepping Up For Buccaneers In Training Camp

According to Pewter Report, coaches and teammates are raving about Otton right now. If that’s the case, then Tampa Bay should be in a great spot moving forward. Typically it’s rare to see rookie tight ends make a splash to start their careers. However, Cade Otton is in a prime position to break that trend. If that’s the case, Brady could have a new favorite target in the Buccaneers’ offense.

Cade Otton Has Been A CEREBRAL Player Already For The Bucs

Otton Stepping up is exactly what this offense needs right now. The Buccaneers have been hit with some bad luck within the offensive line to begin training camp. For that reason, Tom Brady might need to get the ball out quicker than usual as opposing defenses will game plan to rush the middle. Cade Otton could serve as a consistent check-down option to begin his career.

We’ll see how it plays out, as it is still early in training camp. There is plenty of time for Otton to move up the depth chart, especially if he plays well in the preseason. Look for the Buccaneers to keep raving about Cade Otton, as he very well could be the perfect replacement for Rob Gronkowski.