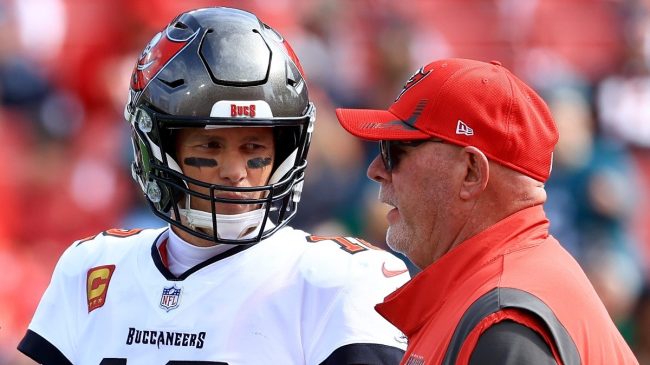 Tom Brady is the ageless wonder as he’s by far the oldest player in the NFL by quite a bit. Additionally, his play amazingly hasn’t declined in the slightest. Even so, many ponder when the future Hall of Fame quarterback will hang it up. Luckily, the former head coach of the Tampa Bay Buccaneers, Bruce Arians, has an idea.

During a guest appearance on Pardon My Take, Arians was asked about how much gas he thinks Tom Brady has in the tank. The superstar quarterback has stated before that he wants to retire at 45 years old, which would be at the end of this season. However, the former Bucs coach thinks Brady could play a few more years.

“With Tom, nothing surprises me. Because he’s in such unbelievable shape. Like I said, he’s throwing the ball better than he did two years ago. So much of it is his personal life. I think you’ve got decisions. But as far as being able to play, he can still play.”

Some have speculated that Tom Brady might just say “the hell with it,” and play until he’s 50, which would be five more years. Regardless, Arians doesn’t see that coming to fruition, per Pewter Report. “I don’t know about five [years], but a couple for sure.”

So, who really knows how much time is left on Tom Brady’s career clock? He announced his retirement at the end of last season but ended up returning. The Buccaneers could luck out and have Brady under center for years to come. However, one thing is for sure, the future Hall of Fame quarterback is going to retire sooner, rather than later.