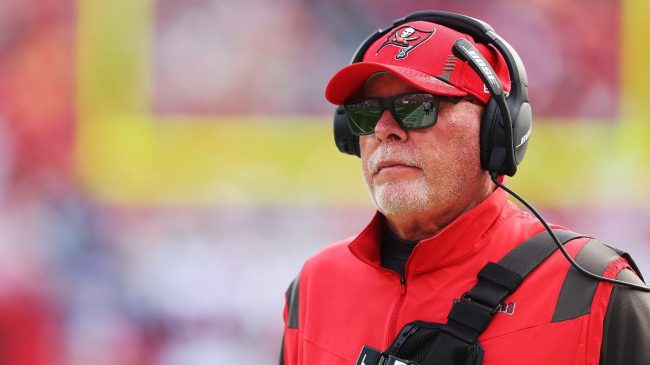 It’s been a wild few years for Antonio Brown as he’s no longer in the NFL. He’s off doing rap concerts and making up dances that are so easy that of course, it went viral. Even so, it’s hard to wash away his dramatic exit in Week 17 of the 2021 season after, then Tampa Bay Buccaneers head coach, Bruce Arians cut him mid-game. Now, Arians reflects on what transpired in that game.

During a guest appearance on Pardon My Take, Bruce Arians was asked about Antonio Brown’s dramatic exit. The former Bucs coach claims it was a very difficult thing to endure and his decision to release Brown mid-game was an emotional decision.

"He's a unique individual that helped us win a Super Bowl."

What more can Bruce Arians say after cutting the WR mid-game and watching him strip and streak across the field? @PardonMyTake pic.twitter.com/iJcCq97Fje

As everyone knows, the superstar receiver refused to go back into the game claiming his ankle was injured. Arians wasn’t having any of it and told Antonio Brown to leave the game immediately. Although the Buccaneers could have used Brown’s help, Tampa Bay was able to overcome the New York Jets in a last-ditch effort to win the contest.

The former Buccaneers coach was able to keep his cool throughout it all. During the interview, he reflects on how he handled the situation. Even the hosts, Big Cat and PFT Commenter pointed out Arians’ years of experience in being able to handle a situation like this one. Had it been a new young head coach, who knows how everything would have transpired?

At the end of the day, Antonio Brown looks like he’s moved on from football. Meanwhile, Bruce Arians now holds a front office job with the Buccaneers. Maybe one day these two can hash it out (can that be aired, please?) but for now, they each seem happy in their new role.