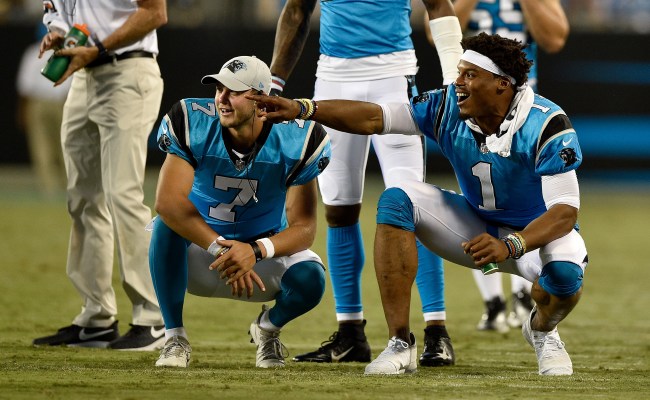 Do you smell that? It smells like a quarterback controversy looming in Carolina! *Michael Jackson popcorn eating meme*

Kyle Allen, a 23-year-old undrafted quarterback is making case to be QB1 in Carolina even with the return of Cam Newton from his foot injury.

Allen has rattled off four straight victories helming the Carolina offense completing 65.6 percent of his passes for 901 yards with seven touchdowns and no interceptions and a 106.6 quarterback rating.

Yes, Allen has fumbled six times (lost four). Yes, Carolina’s success has been fueled by a beast defense that leads the league in sacks and a running back in Christian McCaffrey that is putting up record numbers. Yes, the sample size is too small to crown Allen king.

But, it is enough to raise the question.

Todd Bowles told us in our pre-broadcast meeting that the Allen-QBed team presented more of a challenge to defend than the Week 2 Cam QBed team. Said, among other issues, Allen finds his outlets better

Also said with the Cam QBed team, he could focus his defense on the mesh point between Cam and McCaffrey because “85 percent of the offense” was centered right there. Not the case with Allen.

NFL Network’s Willie McGinest went as far to say during the pregame show that this is now Allen’s team and that Newton won’t be back this year or next.

Willie McGinnest said this is Kyle Allen’s team and Cam Newton will be on another team next year.
I know that sounds crazy but I don’t think it is.
Also, more than a few people in the league believe this.

The NFL is an unforgiving beast.