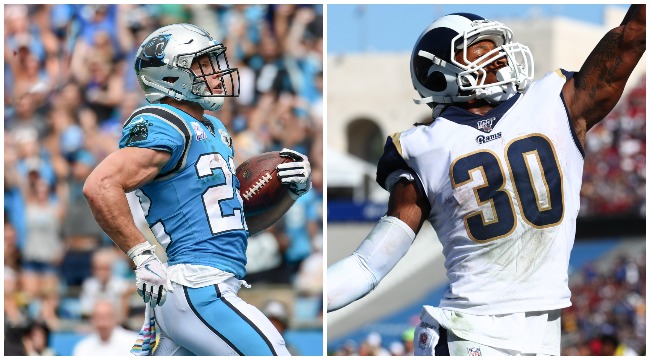 Amidst growing MVP buzz, the Panthers running back ran for 233 yards from scrimmage and three touchdowns in Carolina’s 34-27 win over the Jaguars on Sunday.

The 23-year-old’s 866-yard total is the second most in NFL history through a team’s first five games (first most: decent football player named Jim Brown) and he is on pace for 2771 yards from scrimmage. The NFL record is 2509, set by Chris Johnson 10 years ago.

He’s fucking crushing. Crushing to the point that he currently has more yards from scrimmage than Ezekiel Elliott and Todd Gurley combined, and Todd can’t do anything but tip his cap.

Keep us out of this lol.
McCaffrey is Unstoppable keep beasting brother. #MVP https://t.co/itS5nkIUhR

Well, damn. That made me feel kind of good. Offering respect over defense. Good on you, Mr. Gurley.

Give him that mutual respect, if you call yourself a Christian!

Who woulda thought the internet could be used for anything other than calling people who disagree with your worldview “c*nts.” Faith restored!

P.S. This Spanish sports radio host’s near heart attack after McCaffrey’s acrobatic first touchdown on Sunday is the sizzle and shake I’m missing in my life.

The Spanish radio call from @lospanthers is increíble!!!