Bucs Release The Most Depressing ‘Mic’d Up’ Episode Imaginable 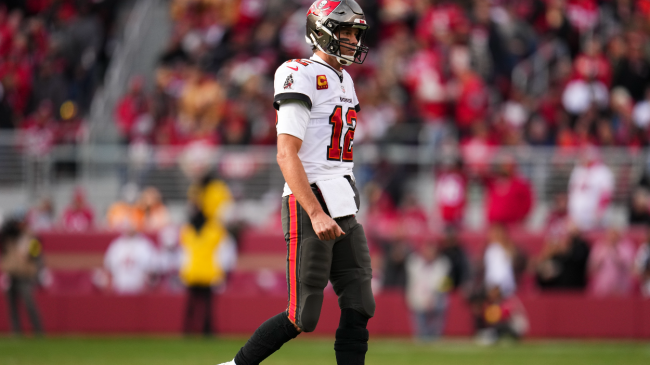 The Tampa Bay Bucs didn’t have the season that they’d hoped for. The team finished just 8-9 in the regular season, and despite winning the NFC South, they saw an early exit from the playoffs.

Tampa was blown out 31-14 by the Dallas Cowboys, officially ending their 2022 campaign. A recently released clip of their star quarterback sums up the year perfectly.

Tom Brady was mic’d up for his Week 14 matchup against the San Francisco 49ers. In what was supposed to be a homecoming of sorts, San Francisco was anything but welcoming.

The Niners posted an impressive 35-7 victory, leaving Brady dejected in his return to the Bay area. In front of family and friends, the passer had maybe his worst game of the season.

He threw for just 253 yards, with much of that coming after the game had already been decided. He also threw a pair of picks and posted his worst QB rating of the year at 63.7.

As you could imagine, there wasn’t much for Tom Brady and Co. to be excited about, which led to one of the most depressing “Mic’d Up” episodes you’ll ever see.

Tom Brady was mic'd up for a big homecoming-type of game for him in front of his friends and family.

You can see him desperately trying to fire up a life-less team all game long. The end is just.. 😔 pic.twitter.com/ffzWR8kos2

Typically, these “Mic’d Up” clips are meant to be a fun way of showing an inside view in the huddle, on the sidelines, and in game action. In Tom Brady’s case, though, all he wanted to do was make it stop.

He fires off a few “Let’s Go’s” and words of encouragement but fails miserably in trying to motivate a lifeless team. By the end of the clip, you hear the quarterback begging his teammate to disconnect the microphone from his back.

“Hey, just take this stupid thing off my back. Just rip it off.”

The game represented Tom Brady’s worst game in his worst NFL season, and this forgettable “Mic’d Up” clip might be the last moment we see of the passer in a Tampa Bay uniform.

The season-ending press conference seemed more like a sendoff, leading many to believe he’s on his way out of Tampa even if he chooses to play in 2023. Oddsmakers are already projecting where he might wind up next.

We’ll have to wait and see what lies ahead for the future Hall of Famer.