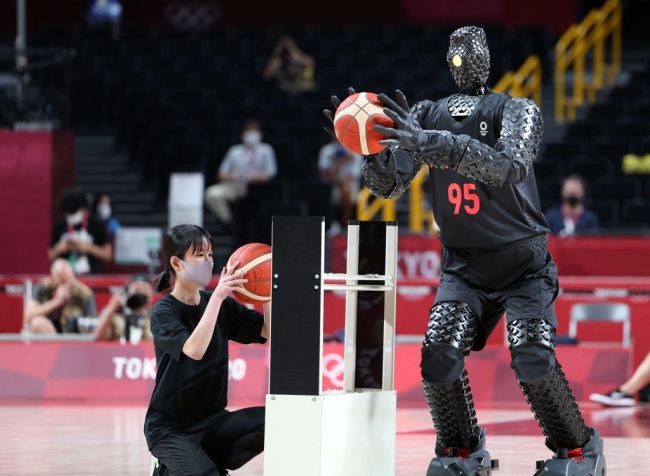 If there’s a silver lining in USA’s first Olympic loss since 2004 on Sunday, it’s that AI may eliminate the human species before we have to witness Iran taking us into double OT.

At halftime of the United States’ 83-76 loss to France, Olympic organizers trotted out The Shape of Water beast to demonstrate to America how to make a shot in international ball without relying on the refs to bail you out.

The hoopin’ robot’s name is CUE, a Toyota-developed creation that was first built in 2018 and upgraded to reflect the evolution of AI technology.

Robots are taking free throws at the #TokyoOlympics.

A basketball robot. For your pleasure. pic.twitter.com/5LZF2vpwNg

there's a robot at the #TokyoOlympics showing off its RANGE

It’s amazing how the internet can turn some good clean fun into a targeted bully campaign against a guy at his wits end.

Ben Simmons for the robot and a first https://t.co/scTvkGP30I

Sixers are NBA champions if we have this robot instead of Ben Simmons https://t.co/7eVsMOOCLP

I heard they trained this robot by using thousands of hours of Ben Simmons footage and programming it to do the exact opposite pic.twitter.com/ncFR4VAmIu

This mf ben Simmons is worse than a Robot with one of the slowest jumpers in the world🤣🤣 pic.twitter.com/AX0ZieslRw

People really created a robot that can hit threes consistently before Ben Simmons learned how to do it. https://t.co/4rftNcXuvK

Too…many…Ben…Simmons…jokes…overload. Read that in a robot voice and it’s solid work. https://t.co/2qSGPE4pYI

I would take to Twitter to stick up for Ben Simmons, but he’s from Australia, so this is not my sword to die on, mate.