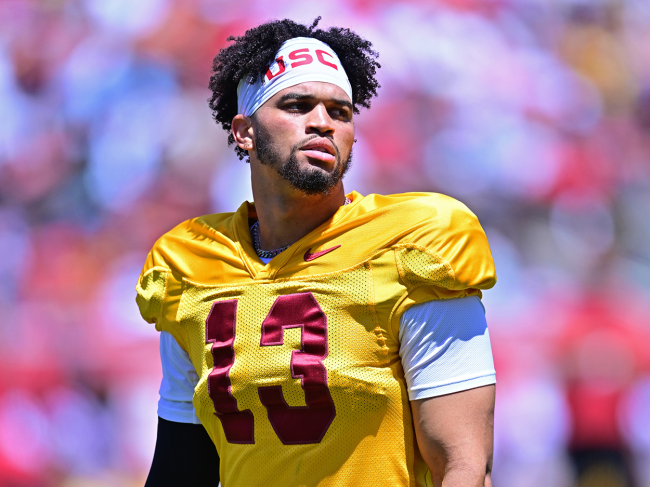 Caleb Williams’ decision to transfer was one of the biggest storylines of the college football offseason. The former five-star quarterback, who took over the staring role from Spencer Rattler midway through his freshman season, stuck out his first year in Norman and then chose to enter the portal.

After Williams’ name officially entered the portal, an expensive bidding war was expected to unfold. Ultimately, he ended up following Lincoln Riley to USC.

However, Williams says that Name, Image and Likeness opportunities had nothing to do with his decision. In fact, in a new profile with the Los Angeles Times, he and his father revealed some new, eye-popping information about the process.

Williams has said multiple times that he and Riley never spoke about NIL during the transfer process. He reiterated that notion in the L.A. Times article.

In addition, Williams says that if NIL was the driving force behind his decision, he had multiple offers from other programs. He was going to get paid wherever he ended up.

“From Auburn to Wisconsin to here [at USC] to back at Oklahoma, it didn’t matter to me,” Williams said to the L.A. Times. “I knew anywhere I went, I was going to get NIL [money.]”

His father Carl also opened up about the offers that his son received to transfer and called them “laughable.” About why money was not a factor in the decision, he pointed to the fact that Caleb is on his way to becoming a first round NFL Draft pick.

His will make big money down the road if that comes to fruition, which is why that was the focus, and Riley currently has three former quarterbacks who are starting or projected to start in the NFL.

“What’s the conversation about a million bucks right now?” Carl asked rhetorically to the L.A. Times. “The conversation is to get prepared for the NFL. It’s that simple.”

As for the schools that Williams was considering, the list was rather diverse.

However, Carl says that a return to Oklahoma was initially atop the list of options— until the school and its fanbase pushed Caleb Williams away, that is.

“We didn’t know what we were going to do,” Carl said. “And honestly, when we went to the portal, Oklahoma was at the top of the list. But they did some things that weren’t in his best interest.”

According to the L.A. Times, Carl, Caleb and everyone in his camp was dismayed by the reaction of Sooners fans, who were extremely salty after Riley left and when Williams entered the portal. Where the Williams family expected Oklahoma fans, who had anointed him as the savior after pulling the largest comeback against Texas in school history, to support his decision and encourage him to come back, they turned on him without remorse.

Carl told the L.A. Times that he “resented how every step was geared to force Caleb into a hurried, emotional decision, including coaches who questioned why he would look around at all.” He also shared the same thing that he told Oklahoma coaches during the process.

“I said this to Bob Stoops. I said this to Brent Venables,” Carl said. “I’ll give you the clean version. You go to college to get prepared for your career. If you want to be a doctor, you go to med school at the best college you can go into. You want to be a lawyer, you do the same. What we wanted to do was be prepared to play [in the NFL on] Day One. That was the driving force.”

And then Oklahoma decided to welcome transfer quarterback Dillon Gabriel from UCF on the same day that Williams officially hit the portal. That made the school’s message loud and clear.

In the end, Caleb Williams made his move. He transferred to USC and will start for the Trojans, who have added a lot of talent through the portal and look to be legitimate College Football Playoff contenders in Riley’s first year at the helm, this fall.