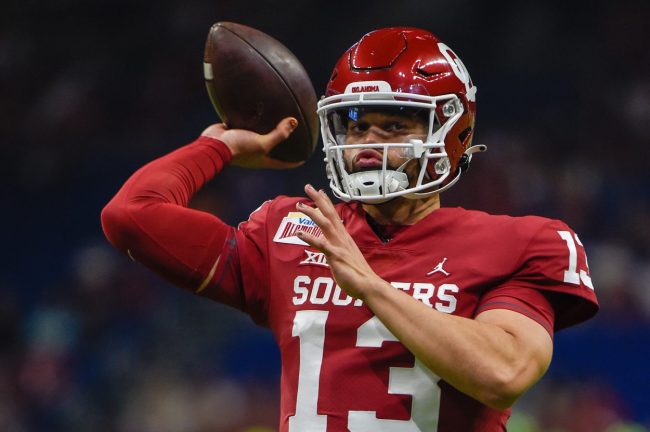 As a result of his announcement, a bidding war is set to unfold. Former Sooners head coach Lincoln Riley and USC are the significant frontrunners, but Georgia, Ole Miss, Auburn and Penn State will surely reach out. Williams also said that a return to Oklahoma is a legitimate possibility.

Regardless of what school ends up landing the D.C. native, it is going to cost a fortune. With the landscape of the transfer portal and NIL, it makes for something of free agency in college football.

Teams can leverage already-established deals for Name, Image and Likeness to lure a transfer with money.

In turn, the world’s most optimistic Duke fan has a plan to bring Williams to Durham, North Carolina.

It won’t happen, but it’s the thought that counts.

To try and convince Williams to join the Blue Devils, a message board user by the name of ‘BlueDevil16’ wants to leverage Apple money.

Tim Cook, the Chief Executive Officer of the multinational technology company, earned his Master of Business Administration from the Fuqua School of Business at Duke University of 1988. BlueDevil16 thinks that Cook should offer Williams a lucrative deal for his Name, Image and Likeness if he is to sign with the Blue Devils.

Obviously, that is not going to happen. However, if Cook was to offer an NIL to land Williams to his alma mater, it may not even be Duke, even though he serves on the Board of Trustees.

Cook earned his undergraduate degree from Auburn University and frequently reps the Tigers. He is more of an Auburn football fan by a large margin and would surely be more inclined to bring Williams to the SEC.

This is all a fever dream, but it’s fun to imagine Tim Cook dropping a bag to get a five-star quarterback to Duke. The game would never be the same.