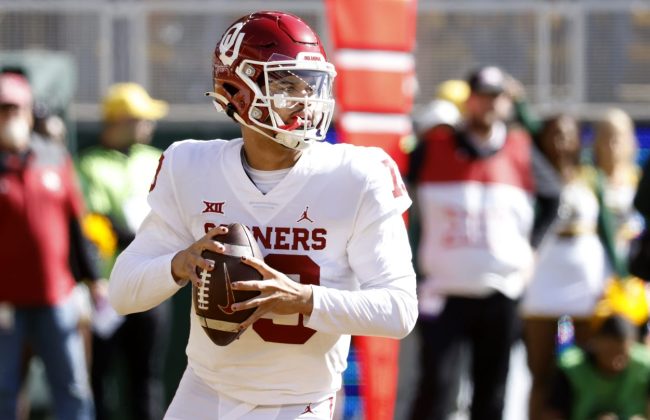 Caleb Williams’ commitment is coming soon. 28 days after entering the transfer portal, he is transferring to the school that everybody predicted from the beginning.

When Lincoln Riley left Oklahoma for the head coaching job at USC, the belief was that Williams would follow him out west. That remains the understanding.

Earlier in the process, Williams was linked to LSU and he also spoke with UCLA. It is unclear how serious his conversations with those schools really were, but the Trojans and Tigers were considered by many to be his final two.

However, per multiple sources in Los Angeles, Williams committed silently to play for Riley while visiting the USC campus a few weeks back. And yet, more than two weeks later, he has yet to announce his decision.

As a result, a lot of recent speculation has been made in recent days.

Wisconsin entered the conversation as a new suitor last week. Badgers head coach Paul Chryst hired a new offensive coordinator with ties to Williams and the thought was that, maybe, he would want to play in Madison.

In fact, over the weekend, the Badgers were reportedly in serious conversations with Williams. The only hold up was on the NIL front.

According to Jon McNamara of the Rivals network, Wisconsin simply didn’t have the money to compete with USC or LSU. A group of boosters and alumni were trying to get an NIL package together, but couldn’t secure enough funds.

The rumor is that the Badgers secured and offered $300,000. That is just a rumor.

Regardless of what the number was, it doesn’t appear to have been enough. McNamara said that Williams turned down Wisconsin on Sunday.

Per his report, Williams called Chryst around 4:00pm and said he was not committing to Wisconsin. That has not been confirmed by the university or Williams, but I have confirmed a similar narrative with sources in Los Angeles.

Williams will play for the Trojans in 2022.

According to multiple sources with direct knowledge, Caleb Williams has turned down Wisconsin and will acknowledge his silent commitment to USC with a public announcement "in the near future."

A public commitment to USC is imminent at this point, it is just a matter of when, not if.