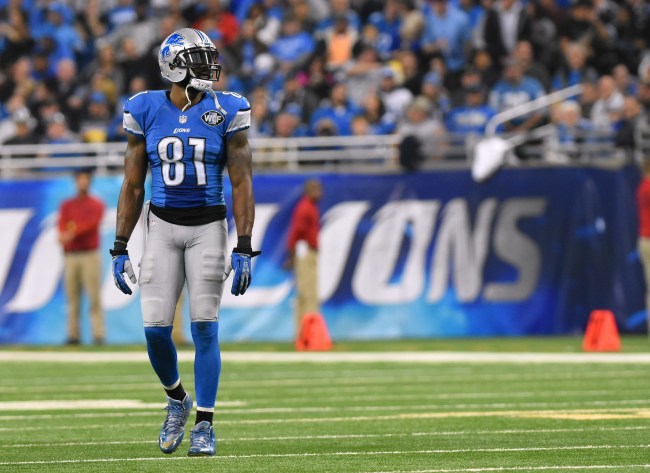 Calvin Johnson was one of the most dominant wide receivers the NFL had ever seen. Built like a race horse, the former Detroit Lions star blended size, speed and strength with some of the best hands in the league, which made him a perennial All-Pro pretty much every season he played. Unfortunately, he abruptly called it quits at age 30, prematurely ending a career that could have gone down as one of the best ever.

Although the man known as Megatron hasn’t played in the NFL since the 2015 season, his name’s making waves again because Detroit Lions president Rod Wood recently said that re-establishing a relationship with Johnson is “a very high priority,” hoping that the two sides can reconcile after parting on bad terms. In response to Wood’s statement, Calvin Johnson laid out a very simple plan in order for that to happen: pay him his money.

After shocking the league with his retirement in 2016, the Lions had Calvin Johnson give back a seven-figure portion of his signing bonus, which, obviously, didn’t sit well with the former wideout. So, should the Lions pony up the cash, Johnson would be happy to repair the relationship.

Per the Detroit Free Press:

“They already know what they got to do,” Johnson told the Free Press at the annual camp he runs for local high school students Saturday in metro Detroit. “The only way they’re going to get me back is they put that money back in my pocket. Nah, you don’t do that. I don’t care what they say. They can put it back, then they can have me back. That’s the bottom line.”

Although Johnson’s made it clear what it would take for he and the Lions to try and reconcile things, considering he seems pretty salty about how everything went down, one has to wonder if there’s much that could ever happen for these two sides to be cool with one another. Just read what the former wideout had to add about his former contract situation and his decision to call it quits prematurely, rather than try to change teams, via The Detroit News.

“I mean, I thought about it,” Johnson said, when asked if he thought about changing teams. “Just like in basketball, you know, guys, they create these superteams. But it’s not quite like that in football where I had the freedom just to go.

“I was stuck in my contract with Detroit, and they told me, they would not release my contract, so I would have to come back to them. I didn’t see the chance for them to win a Super Bowl at the time, and for the work I was putting in, it wasn’t worth my time to keep on beating my head against the wall … and not going anywhere.

“It’s the definition of insanity,” Johnson said with a chuckle.

When asked by the interpreter if that was why he retired, Johnson said, “Yep, and the body.”

Sure doesn’t sound as if Calvin Johnson’s ready to kiss and make up with the Lions just yet, does it?

Who knows what happens with the situation, but, given the Detroit Lions also had something like this happen with another one of their former all-timers, running back Barry Sanders — who was forced to repay $1.88 million of his signing bonus following his surprise retirement at age 31 after being sued by the team for his initial refusal to comply with the demand — it seems like a theme that the franchise might want to try and stop doing. While Sanders and the team did ultimately reconcile, who knows if Johnson follows suit.