Cam Newton Is Interested In Returning To Patriots, Thinks Bill Belichick Is The Most Misunderstood Person In The NFL 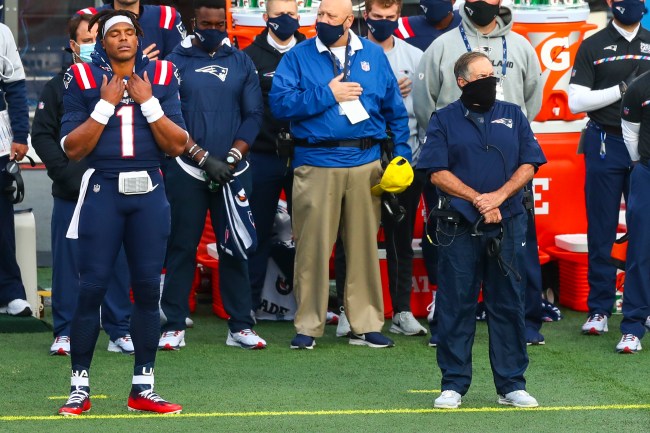 Cam Newton doesn’t seem interested in retiring from football and would be on board with rejoining the New England Patriots next season.

During an appearance on the I Am Athlete podcast, the free-agent quarterback was adamant he wasn’t going to hang up his cleats just yet because he feels he’s still better than several starting QBs in the league.

Newton was later asked whether he’d take a one-year deal to return to the Patriots and he was quick to answer with a “hell yes.” He went on to explain that he believes with a normal offseason and now that he has a good grasp of the team’s offensive scheme he could do better if he was given another shot.

Cam Newton says he would go back to the Patriots, doesn’t comment on whether he’s talking to the Pats (via @IAMATHLETEpod) pic.twitter.com/bkEFrkEkr9

“Yes. Hell yes,” “I’m getting tired of changing. I’m at the point in my career where I know way more than I knew last year.”

“They know me,” Newton explained. “Doughboy (N’Keal Harry) knows me. Jakobi (Meyers) knows me. Bud (Damiere Byrd) knows me. The young tight ends know me. The younger guys that are going to come in, ‘This is how Cam reacts.’ We’re still trying to flush out the 20 years of how it used to be.”

Via the "I Am Athlete" podcast, Cam Newton explains who Bill Belichick really is. "He dope as s**t. He is a cool dude.”

It’s unclear if the Patriots would be interested in re-signing Newton this offseason if they strike out on free agent QBs but some fans don’t seem completely against the idea.

FWIW: I'm in strong support of the Patriots bringing back Cam Newton. He could be a different player with another year in New England and with an improved supporting cast. THAT SAID, if the Pats re-sign Newton, they should also add another player, like JG, Darnold or a rookie QB.

You can watch Newton’s interview on the I Am Athlete podcast where he touches on his time in New England, the controversy he’s faced in the NFL, and other topics in the video below.