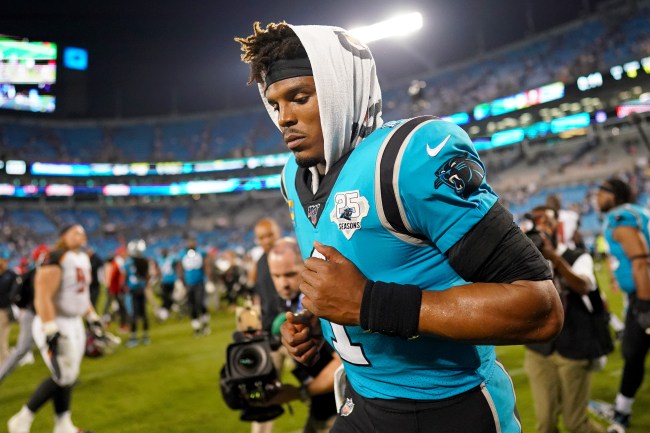 Cam Newton’s Carolina Panthers dropped to 0-2 on the season after a loss to the less-than-formidable Tampa Bay Buccaneers. Newton threw for more than 300 yards, but made some head-scratching throws and was a non-factor with his legs in the 20-14 loss.

What’s more is that the loss looks to be indicative of a trend in the wrong direction for the 30-year-old former MVP. In his last four games, Newton is 0-4 with 0 touchdowns, 3 interceptions, and 2 fumbles. Very not good.

Newton is also taking L’s every time he steps to the post-game podium, as it appears that his stylist is my six-year-old niece.

It also appears that Cam has no idea he looks like a chic grandmother circa 1963.

Cam Newton really said “It’s time for me to look myself in the mirror” out loud and didn’t laugh pic.twitter.com/82f59vWoyG

The internet does what it does best: point and laugh.

Honestly at this point if Cam Newton really wanted to shock us he’d just came to his presser in a sweatshirt. pic.twitter.com/7vGY9CQ5KQ

Cam Newton dressed like he's trying to win "best potato salad at the after church brunch" not an NFL football game. pic.twitter.com/45k630zM9X

What if Cam Newton is just a really big ET fan? pic.twitter.com/8UEHFWDLQi

Why does Cam Newton look like Little Bear when he got the mumps? pic.twitter.com/SVLOajjo7w

Cam newton went from ill have her home by 8 to you know my name not my story pic.twitter.com/8OMC4wgICl

Cam Newton going with the Thelma and Louise ending to the Panthers season. pic.twitter.com/vE4wjwVzow

Newton puts the L in style. That was mean. I like Cam. Sorry.