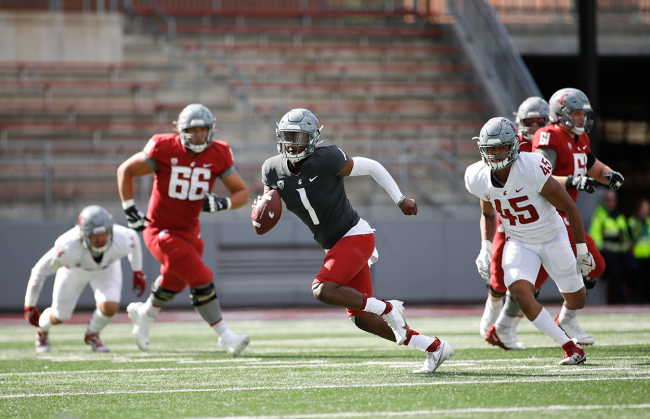 Cameron Ward is one of the most under-the-radar potential stars in college football. The redshirt sophomore is set to be the starting quarterback at Washington State this fall and he is going to turn some heads as early as Week 1.

Ward, who was unranked out of high school, received only one scholarship offer from Incarnate Word. Playing at a high school that ran the Wing T offense, there was very little tape of the Texas-native throwing the ball. He almost went completely unrecruited, but the Cardinals gave him a chance and it couldn’t have worked out any better.

Ward was a cheat code. He looked like a create-a-player in a video game.

After being named the Southland Conference Offensive Player of the Year, Ward announced that he had entered the transfer portal. He then committed to Washington State and signed a deal for NIL.

Washington State QB Cameron Ward got $90k NIL package, including an apartment, a leased truck and flights for his parents to Cougars' games.

Cougar Collective president Jed Collins told me, "It looks like a steal compared to what some of these other quarterbacks are getting."

With fall camp underway at Washington State, there is a lot of buzz around Cameron Ward and his potential. Both as a leader and a player.

The Cougars are installing a new Air Raid system and Ward has been heavily involved. His head coach has already seen growth since the spring.

“It’s the No. 1 thing I’ve talked to him about — his demeanor, his leadership,” said head coach Jake Dickert. “And I’m hearing him more. … He’s saying things he never said in the spring. That growth is really important to him, really important to his future, because he’s the biggest decision-maker on this football team. We trust him to go out there and make the right calls.”

Not only is Ward taking on a bigger role as the most important leader on a football team, but he is balling. The two first looks at the new quarterback from fall camp are short, but impressive.

In the first video, he and his receiver went bowling— kind of. Ward dropped a dime right into the outstretched arms of his pass-catcher, who went flying into to some trash cans on the sideline.

In the second video, which shows Ward commanding the huddle, he throws an absolutely beautiful ball at the 21-second mark. It is the perfect throw to where only his receiver could bring it down.

If Ward plays like he did at Incarnate Ward at Washington State, the grey and crimson could play the role of spoiler in the Pac-12.