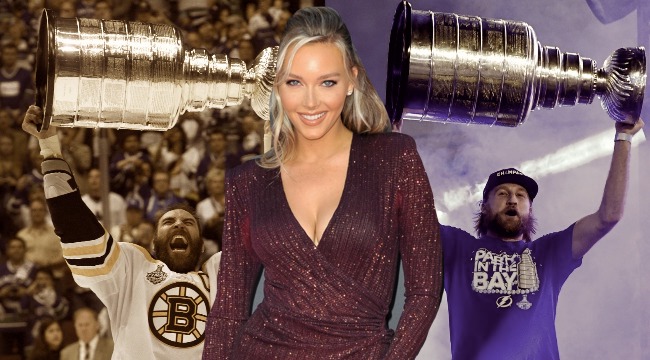 I believe it was Paul Revere who so eloquently said: Once a Chowdahead, always a Chowdahead.

I can confirm. As a Boston native who lived in NY for five years, I never quite lost the urge for a large Dunkin’ iced two creams no sugar, the zest for a good (or bad) Affleck flick, and an aversion to the letter r. I lived in Brooklyn, but my heart was still in section 317 of the TD Garden, where getting beer spilled on you was an act of endearment, just the price to pay for a Marchand dirty dangle.

Camille Kostek—a longtime B’s fan and newish Tampa transplant—appears to be in the same duckboat as I, admitting on NHL Celebrity Wrap that while the admiration for the 2020 Stanley Cup Champion Tampa Bay Lightning is warranted, fanhood does not operate like a light switch no matter how bright the flame.

“I’m a Tampa Bay Buccaneers fan, but I’m still a Bruins fan. I see the Lightning flags all over the place, in downtown and all over Tampa. Why wouldn’t they, their city should be very, very proud.

I’m not the person who moves to a new city, and am like, ‘This is my team!’ Unless, of course, Rob plays for a new team…If the schedule’s cleared, I would love to go back to the Garden.

It’s such an electric environment. I live for it. My brother and sister grew up playing hockey so I’ve always loved being there, smelling the nachos, being in the cold ice, seeing the zamboni, I just love it.”

SO this is happening 🏒 🏆 @NHL pic.twitter.com/9fikkunzKz

If you’re going to move away, settling down in a balmy city where you can witness your man win a Super Bowl and the Lightning win a Cup five months apart isn’t a bad antidote for homesickness.

I empathize with you, Camille. But I do not cry for you.

Catch Camille as host of the new Wipeout reboot, airing new episodes every Thursday on TBS.