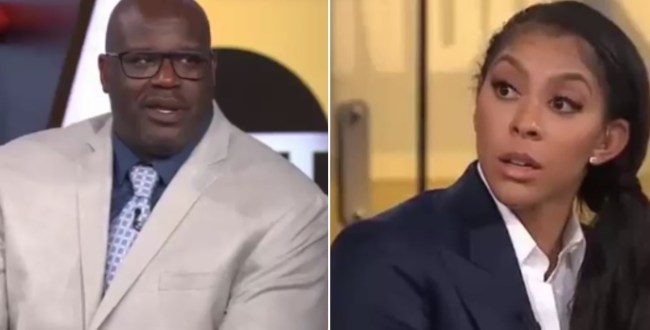 Shaq is having a rough year as an analyst on ‘Inside The NBA.’

Earlier this season, Shaq was straight up called a “casual” fan by Christian Wood for not knowing who the Rockets center was despite the fact that many who follow the NBA closely believe Wood is a rising star in the league.

Fans are once again calling out Shaq for being a “casual” after his argument about modern basketball strategy with WNBA player Candace Parker on the latest edition of ‘Inside The NBA.’

On Tuesday night, Parker and Shaq argued about the intricacies of modern pick and roll basketball after the Nuggets-Bucks game. During the debate, Parker explained how defenses around the NBA are switching more than ever and how the Nuggets offense is suited to take advantage of switching defenses.

Shaq asked why modern defenses don’t just “man up” against the Nuggets instead of switching like they would do back when he used to play which led to Parker using math and analytics to shut up the NBA legend.

Part 2 of Candace Parker putting Shaq in a bodybag. This time with math. https://t.co/2EZ3gvqjNg pic.twitter.com/emmI4GFP9I

Throughout the conversation, Parker looked dumbfounded at how Shaq couldn’t grasp the ins-and-outs of modern NBA strategy.

the faces during this exchange speaking louder than any words https://t.co/3cYAHSzPsZ pic.twitter.com/9vc5xhhT9N

Candace Parker is every woman incredulous that she has to explain this shit to a man getting paid more than her pic.twitter.com/KwU3MULVl3

.@Candace_Parker last night is all of us, twice a week pic.twitter.com/w3CwhRitSf