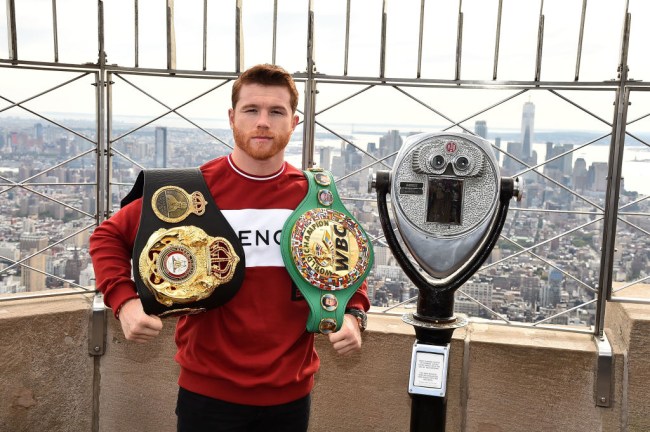 Boxing’s biggest superstar is set to get paid like it.

The 28-year-old middleweight world champion just signed a record-breaking deal with new United States sports streaming service DAZN which will pay him a minimum of $365 million for 11 fights through 2023.

As ESPN reports, Alvarez’s deal is the richest athlete contract in sports history, surpassing the 13-year, $325 million contract Giancarlo Stanton signed with the Yankees in 2014.

Alvarez’s contract comes in the wake of HBO announcing that after 45 years of nearly monopolistic boxing coverage, the network is cutting ties with the sport at the end of the year. This left boxing without a home and made DAZN a motivated seller.

The Mexican boxer’s first fight under the new contract will begin against Rocky Fielding on Dec. 15 at Madison Square Garden, when Canelo will move up a weight class to super middleweight.

Shortly after Canelo signed the paperwork, he told ESPN:

“It’s very important for me to give the fans the biggest fights and the most important fights, and I promise you I will always do that. The December fight with Fielding is a dangerous fight. I am moving up in weight, and I don’t know how my body will feel. But I always want to take on challenges, and I am very happy my fans will be able to see me fight for a small cost.”

Imagine the feeling of signing a dotted line that entitles you to more than a third of a billion dollars. I’d let Chris Christie sit on my head for 9 rounds and 11 fights for a ham sandwich.