Is AEW Considering Bringing Captain Insano Character To TV? There’s One Sign That It Just Might Happen 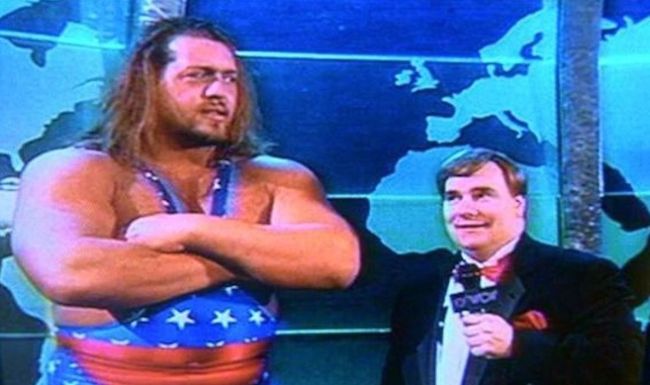 After over 20-years with WWE, Paul Wight decided to leave the company due to creative frustrations and signed with rival promotion AEW.

Wight leaving the WWE for AEW is a bigger move than people realize. Wight isn’t just an established name in the wrestling world but the former Big Show has a recognizable face in pop culture.

Casual fans will recognize him from “The Big Show Show” and appearances on TV in “Happy” and the film “Fighting with My Family.”

Perhaps one of Wight’s most recognizable roles, especially with kids of a certain generation, was his portrayal of the fictional wrestler Captain Insano in the 1998 Adam Sandler classic, “The Waterboy.”

During a recent interview on “Oral Sessions with Renee Paquette,” Wight shared the news that AEW trademarked the Captain Insano character, but didn’t get into specifics for the exact reason why.

Renée Paquett‪e: How weird is it for you to be announced as Paul Wight in a wrestling environment?

Paul Wight: Super weird. Plus, I found out that AEW just filed for the trademark for Captain Insano.

Paul Wight: So, it’s funny I might bring back Captain Insano

Paul Wight: Wouldn’t that be great?

It’s unclear how the company can trademark a character in a film created by another person, in this case, Adam Sandler, but it’s obvious Sandler didn’t care to stop or block the move.

In this same interview, Wight also told an uncomfortable story about taking an F5 from Brock Lesnar and crapping his pants in the middle of the ring.