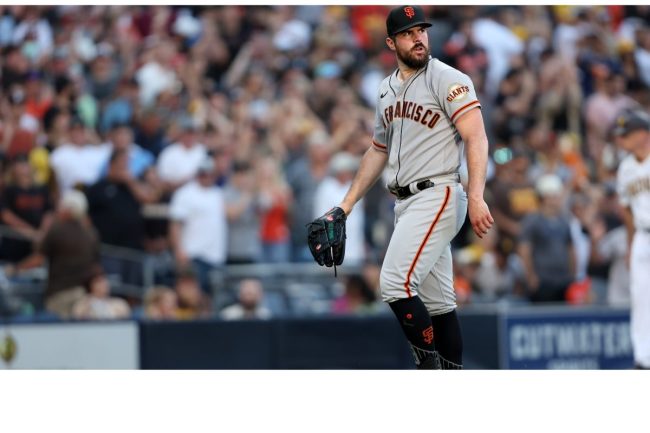 Star pitcher Carlos Rodon is going viral after frustratingly kicking a bat that ricocheted into a Giants teammate on Tuesday. The lefty had been removed from his outing against the Diamondbacks, surrendering five earned runs and a pair of homers through six frames.

The performance was far from his best of the year. In fact, Rodon had been one of the league’s top pitchers over the first half of the season. That earned him an All-Star invite, though he was originally snubbed for the midsummer classic. Through his first 18 starts, Rodon had posted an 8-5 record and 2.66 ERA.

But since returning from the break, he’s seen that ERA skyrocket to 3.18. After allowing more than three runs in a game just twice over his first 18 starts, he’s now matched that for the second half of the year. Rodon has given up 10 earned runs over his last 11 frames, posting an 0-1 mark in his last two appearances.

And Arizona got the best of him last night.

Rodon’s frustrations boiled over after being pulled from the mound, and he took it out on a bat that was leaning up against the dugout bench. The pitcher viciously kicked it, but he didn’t intend on the end result.

Carlos Rodon kicks a bat into his teammate

Carlos Rodon kicked the bat without looking at what was in front of him. And it happened to be teammate Thairo Estrada. The bat ricocheted off of Estrada’s shin, sending him tumbling to the ground.

Rodon’s teammates, most notably Gleyber Torres, were visibly peeved. You can see Torres raise his hands in disgust before having a brief conversation with the pitcher.

You can’t fault Rodon’s frustration as he’s not performed to the level he expects. Everyone in the dugout is angry as the Giants have lost all six of their matchups since returning from the All-Star break. The team has fallen below .500 for the first time this year.

Rodon responded to the kick after the game, saying he was remorseful. Everyone’s mad, but next time Rodon will probably release his anger in a different outlet.