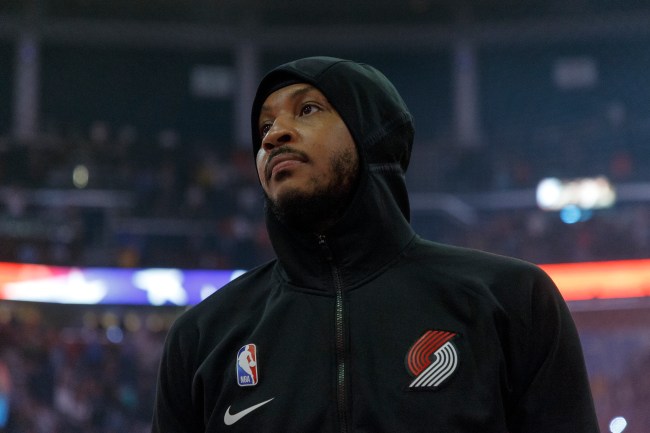 Look, I’m not saying Carmelo Anthony was ever fat, but, let’s be honest, the 10-time All-Star forward has always been a little pudgy, soft and didn’t often show muscle definition. While that clearly worked OK for him — he’s a future Hall of Famer thanks to his scoring prowess — Melo was never going to post hardcore workout videos like fans see from LeBron James or Zion Williamson.

Maybe a couple months in quarantine has changed Anthony’s mentality, though, because, thanks to a video of a recent Portland Trail Blazers shootaround inside the NBA bubble, Carmelo looks like a shell of his former self, appearing to be slimmer than he’s ever been thanks to a wild body transformation. Take a look below to see the results.

That side view of Carmelo Anthony makes him look like a scrawny rookie who needs to put on some weight, not a 17-year vet who has been one of the most lethal offensive players in NBA history. What in the hell has Melo been doing during the NBA hiatus? Whatever it is, it appears to be working, ’cause he’s looking svelte and ready to help lead the Blazers to a playoff berth.

As one might imagine, once the video of a skinny Carmelo hit the Internet, there were plenty of reactions from fans on Twitter. See below.

I guess Melo wants to be a point guard.

The Blazers have a small chance of sneaking into the postseason as the NBA bubble restarts later this month. And, while it’s unknown just how much Carmelo Anthony has left in the tank at age 35, at least he’s putting himself in solid position to perform at a high level with this body transformation of his. A skinner Melo could be a more productive one — which is something Portland will need in order to snag a playoff berth. And with the team getting some size back after injuries to big men like Jusuf Nurkic and Zach Collins, maybe this little layoff is exactly what the team needed in order to shock the league and make a run this year? Guess we’ll all just have to wait and see.