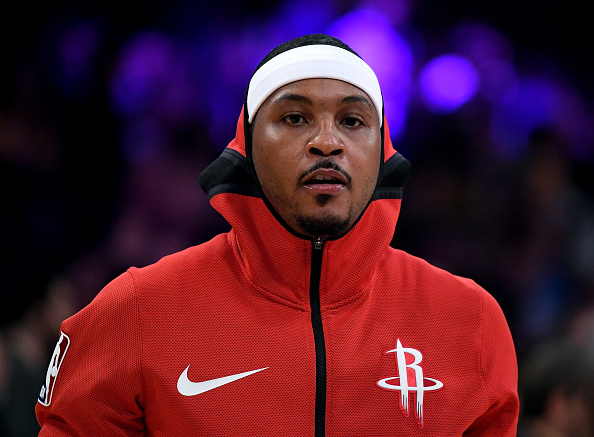 The struggling Houston Rockets appear to be parting ways with Carmelo Anthony. Last night ESPN’s Adrian Wojnarowski dropped a bomb when he reported that the Rockets and Melo were discussing his future with the team.

While Carmelo Anthony is absent with an illness tonight against the Spurs, the Rockets and Anthony are discussing his role and how they might still be able to proceed together for the rest of the season, league sources tell ESPN. Talks are fluid.

The Houston Rockets and Carmelo Anthony are discussing his role with the team and how the franchise and the 10-time All-Star forward still might be able to proceed together for the rest of the season, league sources told ESPN.

Houston is searching for answers during what has been a sluggish start to the season on offense and defense. Anthony and the Rockets were both enthusiastic about his reunion with D’Antoni in the preseason, but both Anthony and the team — which has had injuries and lost key personnel in free agency — are off to a slow start.

Apparently the meeting didn’t go to well because sources close to Anthony are saying that he’s been informed that his time in Houston is over.

On Friday afternoon, Houston announced details of a Carmelo Anthony foundation event scheduled for Wednesday. On Saturday night there are questions circulating leaguewide about whether Thursday’s loss at Oklahoma City was Anthony’s last game as a Rocket https://t.co/Z3usCTa5uW

The Rockets have denied they are waiving Carmelo Anthony, but two sources close to the situation say Anthony has been informed that his brief time with the team will soon be ending. Anthony has been listed as "out" for Houston's game tonight against Indiana due to illness

We’ll have to see if any team would be interested with Melo at this point of his career.

Sources: Carmelo Anthony isn’t making the trip to Denver with the Rockets.

Sources: Rockets players and coaches believe that Carmelo Anthony has played his final game for the franchise.